Please ensure Javascript is enabled for purposes of website accessibility
Log In Help Join The Motley Fool
Free Article Join Over 1 Million Premium Members And Get More In-Depth Stock Guidance and Research
By Daniel B. Kline – Oct 31, 2018 at 8:14AM

A new study shows that some workers in London believe they should, and their logic applies to many American workers.

Commuting to work has generally been considered a necessary evil. You have to get to the office somehow, and time spent in your car, on the train, taking the bus, or using whatever transportation you use has long been something workers have had to put up with.

The average worker spends 26 minutes commuting according to a recent Washington Post article. That's time that people may spend working -- especially workers using public transportation -- but it's not time workers get paid for. That's something that a new study of 5,000 British commuters suggests may be a mistake.

"According to this new research, when Wi-Fi is available to commuters who are traveling by bus or train, these employees use their devices to accomplish work tasks and prepare for their work day," said Employco USA President Rob Wilson in a press release. "As a Chicagoan, I have seen this firsthand, as many hard-working individuals taking the El, the Metra or the bus often log-in and start accomplishing work tasks before they even set foot in the office." 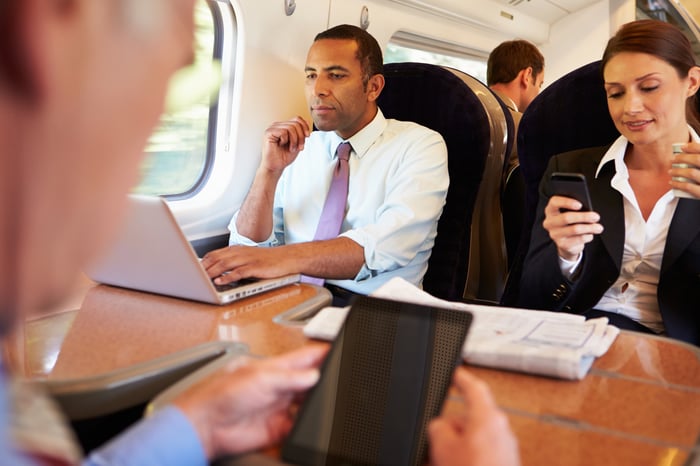 Many people work while commuting even though they are not paid for the time. Image source: Getty Images.

While many companies allow employees to work from home, most do not consider time spent commuting work hours, even if the time is spent working. That's not in line with how many employees treat their time commuting according to the study.

"If travel time were to count as work time, there would be many social and economic impacts, as well as implications for the rail industry," said Juliet Jain, one of the professors who conducted the study. "It may ease commuter pressure on peak hours and allow for more comfort and flexibility around working times. However, it may also demand more surveillance and accountability for productivity."

Basically, if people are working, the time spent doing so should count as work even if it's during a commute. That would require a pretty major shift in thinking for American businesses, but it might help lessen a pain point that has been costing businesses workers.

Nearly a quarter of American workers (23%) have left a job because of a commute according to a survey from global staffing firm Robert Half. The problem is worst in Chicago, Miami, New York, and San Francisco -- major cities where public transportation is an option.

In a market where leverage has shifted from employers to employees, companies should consider measuring time spent working rather than time spent sitting at a desk. It's really a question of valuing productivity over the traditional time clock mentality.

People don't like commuting largely because it feels like wasted time. If a company can turn that time into hours that count, workers likely won't feel that way. Happy workers will be less likely to leave their jobs, and that's something that has become very important during the current period of low unemployment.