Billionaire Richard Branson gets into his hot air balloon the same way as anyone else, one leg at a time. Actually, while the entrepreneur, philanthropist, and founder of the Virgin Group may be known for some of his more outlandish hobbies, he's actually driven by the same thing that helped start his career: a desire to make a difference.

At 15, Branson launched a magazine -- something that wasn't easy in the pre-internet era -- because he was "very interested in what was going on around the world," he told Feedzai CEO Nuno Sebastiao during a keynote interview at the recent Money 20/20 event in Las Vegas. That happened during the Vietnam War, and Branson wanted to "contribute in a tiny way to stopping the war." 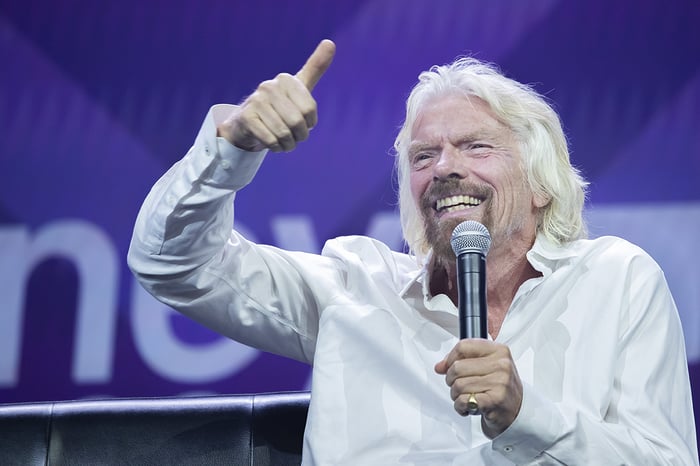 Activism and making a difference remain a key part of what motivates Branson now. That has led to him creating dozens of companies both for-profit and non-profit according to a philosophy he explained to Sebastiao.

"I've never thought of my entrepreneurial career as building a business," he said. "I've seen situations in life that have frustrated me and thought, 'I could do this better.'"

Branson entered the airline industry because of a canceled flight between Puerto Rico and the Virgin Islands. The flight was canceled due to it not having enough passengers and that infuriated a then-28-year-old Branson.

"I went to the back of the airport, hired a plane, borrowed a blackboard and wrote 'Virgin Airlines one way to the Virgin Islands,' went to all the people who got bumped, and I filled up my first plane," he said.

That attitude has led to countless Branson-led businesses including his current efforts to create a space tourism company. It has also pushed him into areas where things did not entirely work out.

It's OK to fail

Branson launched Virgin Cola to take on Coke. For two years, he said, the new beverage outsold both Pepsi and Coke in the United Kingdom.

"People were pouring into the shops to get our cola," he said. "I really thought we were going topple Coke on a global basis. I was getting very big-headed."

Then, however, reality stepped in and Coke "filled up a DC-10 with SWAT teams, money, and they arrived in the U.K. and Virgin Cola just disappeared," Branson said. "...If you're going to take on the giant you have to be much, much, much better than them."

Be about more than profit

Branson has not just built companies that enrich him, he has also been a leader in philanthropy. In 2004, the billionaire created Virgin Unite, a charitable organization that has served as an umbrella organization for a variety of non-profits that draw on the resources of the various companies Branson has started. Since then, he has launched countless other non-profit efforts including "The Elders," an "independent group of global leaders working together for peace and human rights."