There are lots of ways to tackle big issues.

Leaders don't complain about problems -- they find solutions to them. Being a leader, of course, does not always mean being the boss. You can show leadership from any level of a company -- it's about seeing something that's wrong and identifying ways to fix it.

Of course, there's more than one way to solve any problem. Here's a look at how some of our Motley Fool contributors have tackled some pretty big problems at work. 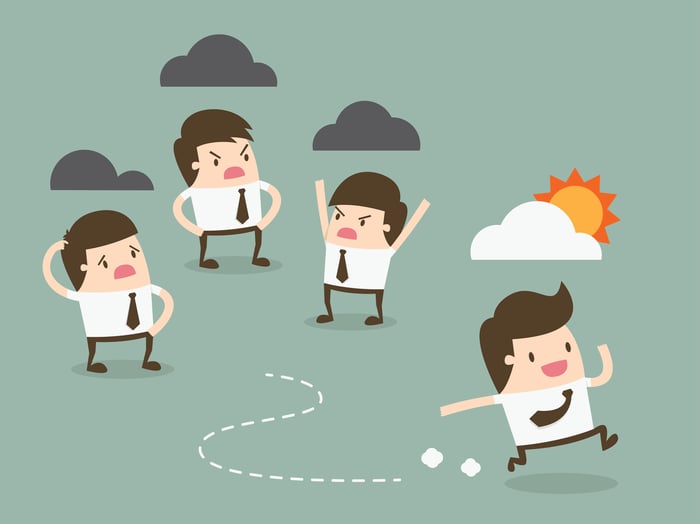 Bad situations can be improved if you address them. Image source: Getty Images.

Make it a game

Selena Maranjian: Many years ago, I was a high school history teacher, and a major problem I faced was not unusual: Many students were not that fascinated by history and not that motivated to study it. This was quite apparent when I was grading their tests. I tackled the problem and improved the situation by introducing games into the process.

Before most tests, I would devote one class session to a "Jeopardy!"-like game. I would have prepared several dozen questions on a handful of topic categories -- such as "Civil War Battles" or "President Kennedy." On the blackboard, I'd draw a grid, with categories across the top and the boxes below them showing what value a question had.

The class would be divided into competing teams, and when it was one team's turn, they might say, "We'll take 'The New Deal' for 300." You can imagine the rest. It was an effective strategy because it added the elements of fun and competition into studying history.

This is called "gamification" and it can be applied in many settings. Health and fitness apps, for example, let you log your activity and progress and compete with friends, encouraging each other along the way. Language-learning apps offer bite-sized games, where you match words and meanings and perhaps try to beat your top score.

In workplaces, corporate training materials often feature gaming, with employees earning badges for various achievements and perhaps competing with other departments for high scores. Starbucks is one of many companies that use games to engage customers. Its rewards program lets customers receive stars for their orders, attaining various status levels and earning rewards.

Whatever you do at your job, think about whether adding an element of gaming would improve anything.

Threw money at it

Maurie Backman: When I worked at an online marketing company, I was in charge of overseeing website content for a wide range of businesses. Some industries, like the legal and medical fields, came with strict advertising requirements we had to adhere to. It took me some time to get up to speed on those rules, but after hours of reading and consulting with a few experts, I was pretty much set.

When my company decided to expand and take on Canadian clients, however, things changed. Suddenly, I was faced with a new set of rules that differed from province to province, and since I was in the midst of tackling several other large projects at the time, I found myself in over my head. But rather than flip out, I made some calls and found a few Canadian professionals who could help us deal with our compliance issues, provided we were willing to pay.

Now, anyone who's ever had to ask for money at work knows that it's not easy, but I put together an effective presentation and shared it with my boss and her manager. In it, I explained the time investment I'd already made learning the U.S. laws, and how I felt the help of an outside consultant would be the most effective way to ensure that our content was compliant this time around. Thankfully, they agreed, and within a week, I was able to secure the outside help I needed.

It's often good to be proactive at work and try to address problems yourself, but there comes a point sometimes when you can't do it all. Throwing money at that particular problem was the best means of ensuring that my company was covered, and that I wasn't going to risk botching something major and exposing my company and its clients to potential lawsuits for online advertising violations. And that's why I'm glad I was bold enough to ask for it.

Daniel B. Kline: Problems in the office, just like ones at home, can fester if not dealt with. Unfortunately, in many workplaces, people on the same team or who have to work together, sometimes have issues with one another that never get resolved. This can cause problems to spread from just the two people involved, and make it grow bigger than just a personal beef.

The best way to cut off this sort of issue is to deal with it directly. For example, back when I edited daily newspapers, reporters would sometimes have fights over whose beat a certain story fell under. Maybe one would just assume it was his or hers to do and another would be quietly angry.

As the boss, it was my job to make the situation public and have the two people address how it should be handled next time. At times, there was a clear answer and one person was right to claim the story. In most cases, that wasn't the case and I had to build an understanding between two people about how to decide similar situations in the future.

Sometimes that just meant both talking to me and then my having to disappoint one or the other. Most of the time, however, I could build understanding to the point where both reporters would talk and resolve future problems on their own without getting mad at each other.