Please ensure Javascript is enabled for purposes of website accessibility
Free Article Join Over 1 Million Premium Members And Get More In-Depth Stock Guidance and Research
By Maurie Backman - Dec 6, 2018 at 8:18AM

Performance reviews can be tough on employees. Here's what you can do as a manager to make them better.

It's that time of the year at the office -- a time to sit your employees down and tell them where they stand by giving out performance reviews. Many workers dread these reviews because they're awkward and uncomfortable, and some managers aren't fans, either. But if you're tasked with delivering a series of reviews as the calendar year wraps up, you'll want to make them as helpful and effective as possible.

With that in mind, here are a few things you shouldn't do during those reviews.

1. Focus only on the negative

The purpose of performance reviews is to tell employees what they're doing right and where there's room for improvement. But if you fixate on the latter too much, your employees might start to think that in your mind, they can't do anything right. That, in turn, can hurt their morale and make them question whether they ought to stay on board. 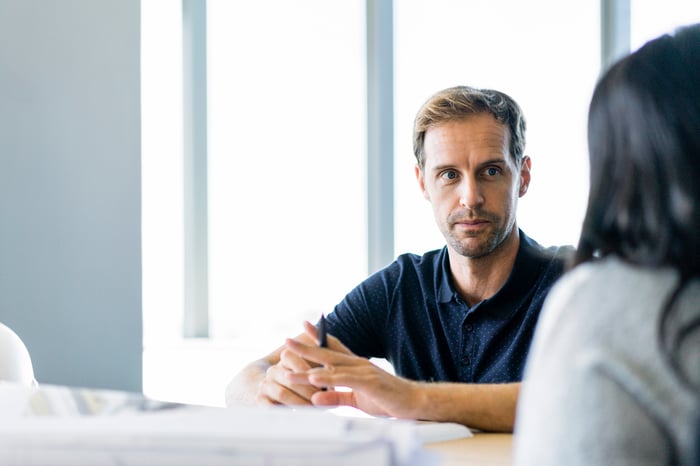 Therefore, when you give your reviews, aim to have, at the very least, an equal mix of positive and negative things to say. Maybe you have an employee who's terrible at giving presentations because his public-speaking skills are sorely lacking, but if that person always researches his points thoroughly, give that a mention as well. You might say, "Your presentations are extremely well-thought-out. Now let's work on your public-speaking skills to better do them justice." This way, you're not just being critical.

As a manager, it's your job to make your employees aware of their shortcomings. At the same time, simply telling them what they've been doing wrong probably won't do much to help them get better. If you really want to see their performance improve, go into those reviews with concrete suggestions on how to address the challenges they've been facing.

For example, if you lead an IT team and have an employee whose updates consistently result in system bugs and network issues, don't just tell him that his carelessness is unacceptable. Instead, find a course that'll refresh or expand his knowledge, and suggest that he sign up for it. If you can get the company to help subsidize its cost, even better.

3. Deny your employees the chance to respond

Performance reviews shouldn't be one-sided. As the boss, you might be in charge of guiding those reviews and making sure you get a chance to convey key points, but that doesn't mean your employees should have to sit there silently, nodding along to your feedback. Rather, give them a chance to respond to your comments and ask any questions they might have.

If, for example, you ding an employee for not meeting project deadlines, that person might want a chance to explain that he's often forced to rely on other people's contributions that tend to come in at the last minute. Granted, that might not change the outcome of that review, but it might prompt you to address the greater issue at hand.

Performance reviews can be extremely productive if you go about them the right way. Avoid these mistakes, and with any luck, you and your employees will walk away from those conversations feeling good about how they went.