The holidays are a time to celebrate, and if you work in an office, there's a good chance you've already been invited to your company holiday party. But whether you're dreading that soiree or very much looking forward to it, the last thing you want to do is make the same mistake 26% of Americans have made in the past: doing something at a company party they later regret.

According to a survey by beverage purveyor Four Loko, workers' top holiday party regrets include:

And 9% of workers have done something so egregious at a company party that it resulted in a reprimand for their behavior. 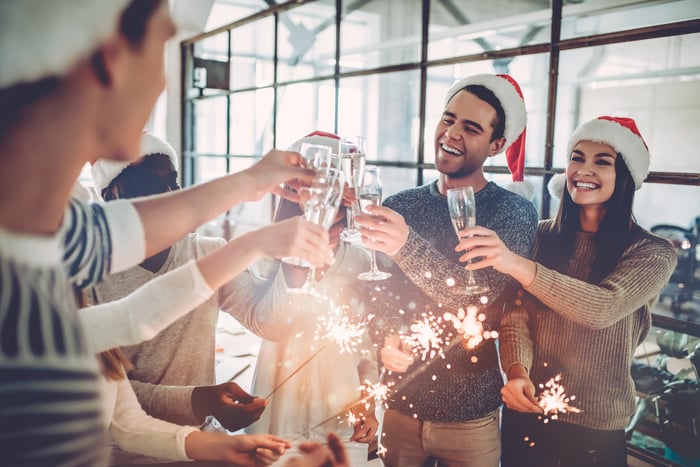 Even if your actions don't reach that extreme, acting inappropriately at a company holiday party is a good way to make the situation extremely awkward at work. In fact, 18% of employees have been ashamed to go into the office the day after a party, Four Loco found, while 16% have gone so far as to call in sick.

To avoid joining the ranks of those workers who have walked away from a company holiday party with their egos and reputations bruised and battered, here are a few tips for making it through the night unscathed:

This is a big one. Even if you typically have no problem handling a drink or five, your company holiday party is a good time to err on the side of extreme caution. Keep in mind that while many of these parties provide finger foods or hors d'oeuvres, you'll often find that you're not getting the equivalent of a full meal. As such, you'll need to go easy on the alcoholic beverages to avoid becoming a sloppy mess at the worst possible time.

2. Think before you speak

When there's music playing and drinks flowing, it can be easy to forget that the people you're talking to are your colleagues or company higher-ups, as opposed to your pals. But they're not your buddies; they're the people you need to face at the office the day after that party, and the day after that. So before you open your mouth to make a potentially inappropriate joke, political statement, negative comment about the company, or anything else that could be construed as controversial, bite your tongue and think about whether you're better off waiting for a different audience. If you're not sure, picture yourself in a conference room during the workday with those same people and ask yourself whether you would make that comment there. If the answer is no, keep it to yourself.

3. Imagine you're being recorded

Maybe there's a person on your team who's notoriously bad at meeting deadlines, or a colleague who never seems to make it into the office on time. Your company party might seem like a good opportunity to do a little low-key bashing of that co-worker or gossiping, but it isn't. You never know who might walk by or overhear your comments, and if they get back to the person you're talking about, it could damage your working relationship. Therefore, even if you're discussing things the folks around you already know, approach that party as if you're being recorded, and don't say anything you wouldn't want on the record.

4. If you're the boss, set a good example

It's not just run-of-the-mill employees who have been known to get out of hand at company parties; a surprising 36% of workers have seen their managers do something embarrassing at a holiday gathering, the survey found. When you're the boss, all eyes will be on you, so you'll need to go out of your way to be on your best behavior. That means following the above tips, but also being sure to make the rounds and have conversations with those who report directly to you as well as your peers. As a manager, it's on you to make everyone feel welcome at that gathering -- especially those folks who you suspect aren't particularly comfortable being there in the first place.

Company holiday parties are supposed to be fun, and they can be if you approach them with caution. Avoid the above mistakes, and you'll survive the festivities without hurting your career in the process.