Some trends have a big impact and then fade away. It used to be trendy to rip your own perfectly good jeans, but that has mostly gone away (though people still buy pre-ripped jeans). Other trends speak to what's happening in society, and they take root for a longer period of time.

Heading into 2019, the job market has been shaped by longer-term trends. Unemployment has been at or near record lows, rising concerns about technology abounds, and workers are trying to take back power from their employers. All of these patterns are likely to continue shaping the workplace in the new year, according to Glassdoor's annual Job Market Trends Report. 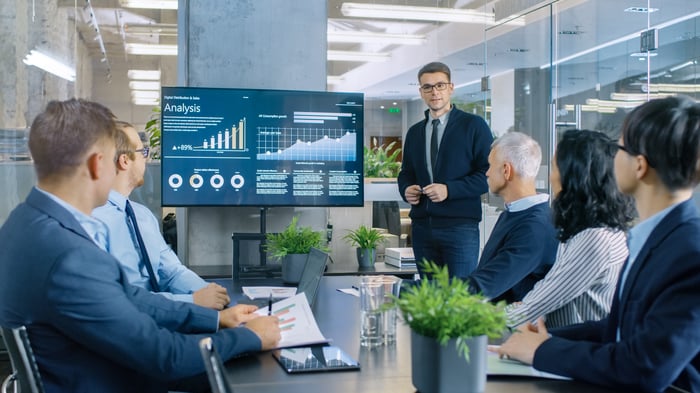 "After nine years of steady growth, 2018 saw one of the strongest job markets in a generation," Glassdoor Chief Economist Andrew Chamberlain said in a press release. "We're witnessing a power shift as job seekers leverage their market position and employees make an impact with their voice. Plus, as technology matures, it's changing how we work and the variety of jobs available."

The report by Glassdoor, one of the world’s largest job and recruiting sites, examines the five job market trends that dominated the past year. None of these are going away anytime soon, and all will continue to shape the employment market through 2019 -- and likely beyond.

1. Artificial intelligence (AI) is a friend, not a foe.

The lack of availabile workers has caused ripples throughout the economy. If companies can't get workers to fill their positions, they're going to find other ways to get the work done. That's something that has scared workers who have been concerned that their positions might become automated, but that's not what happened in 2018.

Instead of replacing workers, AI has helped them do their jobs better. Automation can handle repetitive tasks, leaving humans free to do the work that requires a human touch.

Clearly, 2018 has been a year in which women have demanded their due. That has been noticeable not just through the #MeToo movement, but across various areas of employment. More women took on more prominent positions in 2018, both in the boardroom and in politics -- where a record number of women won seats in Congress.

This trend is in its early stages, according to Chamberlain. "Although it has been another year of progress for women in corporate leadership, there's still work to do," he wrote in the report. "According to the Pew Research Center, women only hold about 10% of the top executive positions at U.S. companies, with women making up just 5% of chief executives of S&P 500 companies."

Consumers have actually had a fairly blase attitude when it comes to criminals compromising their data, but they have been vehemently against companies doing it willingly. That led to a major backlash against Facebook, and it has led to growing concerns in the workplace as to how employers are tracking and using data.

4. The gig economy is smaller than once expected.

The gig economy gets a lot of hype, but it's only about 1% of total employment in the U.S., according to Glassdoor data. That's not an insignificant amount of people, but it's perhaps not equal to the amount of media coverage given to "side hustles" and the gig economy in general.

While Amazon.com (NASDAQ:AMZN) made a big show of looking all around the country for the location of its second headquarters, it opted to split the new facility between two rather predictable markets: New York City and Northern Virginia, which both boast healthy pools of educated labor.

Glassdoor research shows that a city's local labor force is crucial to finding the right talent, Chamberlain wrote. "The reason: most workers don't want to move to a new city for a job ... Amazon's decision to make a second (and third) HQ is a more practical choice for their business and for the company's recruiters."

If the economy falters, more workers could be pushed into the gig economy. That's still not likely to make that sector a major player -- or anywhere close to the importance its the level of attention suggests.

What could change is the final trend. Major companies have flocked to the biggest markets. Both Amazon and Alphabet's Google have plans to expand in New York, and both companies also have a significant presence in Boston. Apple, however, has chosen Austin, Texas, for the site of its major new operation.

Austin isn't a blighted area in need of major investment like, say, Detroit. But it's also not New York, Seattle, or San Francisco. It's possible that real estate prices and competition for workers may push some companies to look outside the cities with the highest-caliber workforce. And it's possible that the cost of living in New York, Seattle, San Francisco, and other major cities may convince certain workers to move, even though most have been reticent to do so in the past.