We all know the familiar refrain: If you're sick, stay home! Easier said than done.

Plenty of Americans who fall ill choose not to call in sick to work, while others have employers who make doing so nearly impossible. When people don't stay home when they're sick, it can result in spreading disease to coworkers, customers, and everyone else they may encounter in their workplace. 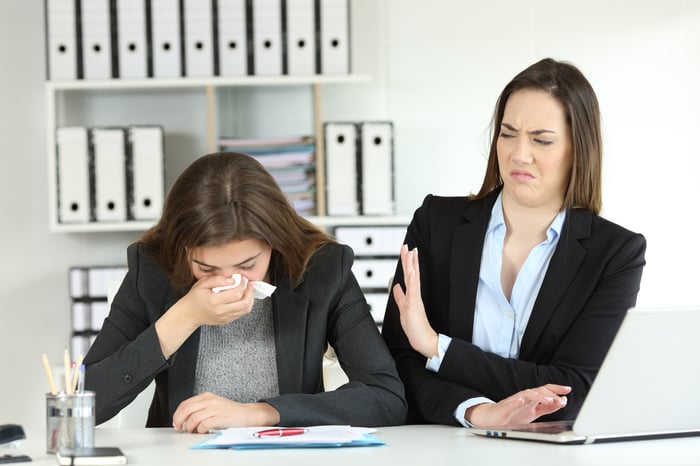 Going to work while ill might get other people sick. Image source: Getty Images.

Most part-time workers simply don't get any pay when they take time off to recuperate from an illness, while many full-time workers do at least get some paid time off for sickness. About a quarter (26%) of full-time employees are afforded 1 to 5 sick days, 28% receive 6 to 10 sick days, 10% get 16 to 20, 26% are allowed 21 to 60, and 28% work at companies that offer unlimited sick days, according to a recent survey of 1,012 full-time employed Americans.

Being entitled to time off and actually taking it are two different things. It's encouraging that more than half of those surveyed have used at least some of their sick days. Still, many people continue to show up at work when they probably shouldn't, even if sick days are available.

Sick days serve two purposes. First, they allow the employee to recover from an illness without giving up income. Second -- and perhaps most importantly -- sick days keep sick employees from spreading germs and disease. That's good for everyone involved -- the worker who gets the day off, the in-office employees who remain healthy, and the company that is spared having numerous employees fall ill resulting in loss of productivity.

Despite it making sense for employers to offer sick days and for employees to take them as needed, things don't always work as they're supposed to. And the fault doesn't necessarily lie in employers not offering enough days.

"More than half of full-time Baby Boomers (60%), Gen Xers (59%), and Millennials (53%) said they use some of their sick time, but ultimately have days or hours left over at the end of the year," according to the survey conducted by law firm Farah and Farah. "Baby boomers were also the least likely generation to run out of sick days and the most likely to not take time off for their health at all."

How an employer feels, and projects this feeling, about workers actually using their sick days impacts how the worker will act and how the worker feels about the company. Of course, that's likely just a symptom, because an employer who discourages workers from taking time off when ill probably has deeper cultural problems.

Letting workers stay home when they're sick benefits both employer and employee. People who come to work sick cause problems beyond the damage they do to their own health. Those problems can become even worse at companies where employees interact with the public in jobs like customer service, handling food, or caring for children.

Clearly, both employers and employees have work to do. Nearly 4 in 10 (38%) of those surveyed said they have gone to work while contagious. That's a dangerous mistake that might be caused by a worker's being overzealous or by company attitude or policies for sick days.

Solving this problem requires employers not only to offer generous sick leave but to actively encourage employees to use it. And that means workers have to agree to both stay home when sick and not abuse the policy as a way to take longer vacations or eke out extra fun days. That's a challenging balance to strike, but it can happen at companies that work to build a mutually supportive culture.