Please ensure Javascript is enabled for purposes of website accessibility
Log In Help Join The Motley Fool
Free Article Join Over 1 Million Premium Members And Get More In-Depth Stock Guidance and Research
By Daniel B. Kline - Jan 9, 2019 at 7:03AM

Be careful, and put your well being -- and not your career -- first.

It's funny when a villainous cartoon boss torments his employees. When Mr. Burns ends a company party by releasing the hounds -- or Mr. Spacely bellows "Jetson, you're fired!" -- it's amusing. That's at least partly because so many of us have worked for irrational tyrants.

Not everyone encounters a truly awful boss. You're more likely to get a jerk, or someone well-intentioned but incompetent. But if you find yourself working for someone that's deplorable, and not in an endearing cartoon way, there are things you need to keep in mind in order to avoid becoming another victim. 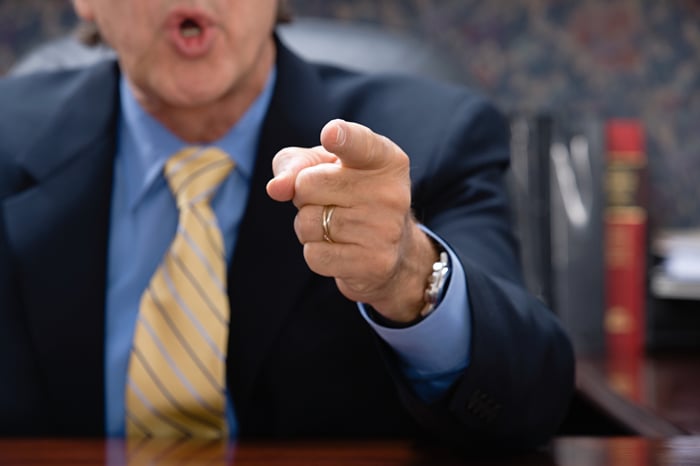 1. You're more than your job

For people dedicated to their work, their job becomes their identity. They think of themselves as the vice president of human resources or the assistant controller first, and it seems impossible to separate from that identity. That makes it harder to see a way out when you're in a situation with a toxic boss.

The reality is that there are other jobs that actually deserve your level of dedication. Leaving may be hard, but if you can't rectify the situation (or your terrible boss is the owner or CEO) then leaving with your head held high may be your best choice.

Waylon Smithers seems like a nice guy when he's not working for Mr. Burns. In his capacity as Burns' right hand, however, he's often forced to do things like position employees over the trap door that shoots them out of the boss' office.

Sometimes you're part of the problem, or at least complicit by proximity. You don't have to make a pointless stand, but if you're put in a position that feels wrong protect your integrity over protecting your job.

3. The best can be yet to come

Quitting your job to flee a toxic boss comes with short-term pain, especially if your former boss decides to badmouth you on the way out. But that's not a good reason to stay.

You deserve to be in a positive work situation, one where you're happy to come to work and free of needless tyranny. But that doesn't make the short-term uncertainty of leaving any less scary. Embrace the pain -- know that while it's going to hurt, and it may hurt for a while, ultimately you can't stay. Working for a toxic boss will slowly kill you, and if the situation can't be fixed then you have to leave.

Of course, the best thing about coming from something terrible is that nearly anything else should be better. Even an incompetent or mediocre boss will be a breath of fresh air, and if you find a great boss -- well, you'll appreciate it more given where you came from.

Homer Simpson has, of course, been a victim of Mr. Burns' vindictiveness (and, for many years, his inability to remember Homer's name). Unlike many real toxic bosses, Mr. Burns actually shows kindness quite often. He has given Homer his job back countless times, and has largely overlooked that he's a terrible, perhaps criminally incompetent safety inspector.

You, however, are probably not a borderline alcoholic who sleeps at his or her desk. That means you don't deserve a toxic boss -- even one that sometimes shows a kinder side. You deserve better, and should take the steps needed to eventually get the work situation you deserve.