The beginning of a new year gives you a great opportunity to start fresh at the office and set the stage for success. But doing so generally means curbing those behaviors that have been known to hold you back. Here are four specific habits you'll want to break as soon as you possibly can.

Whether it's in-person meetings, conference calls, or just plain arriving at the office, showing up later than when you're expected sends the message that you're irresponsible and don't value other people's time. If you've been known to be tardy on more than one occasion, it's time to kick that nasty habit to the curb. And a good way to do so is to be more strategic about scheduling.

Going forward, don't just block off time on your calendar for meetings and conference calls. Rather, block off the 10-minute or 15-minute period leading up to them for travel or preparation time. This way, you're less likely to be late. And as far as your morning routine goes, assume that everything that can go wrong will go wrong, and wake up early enough to compensate. 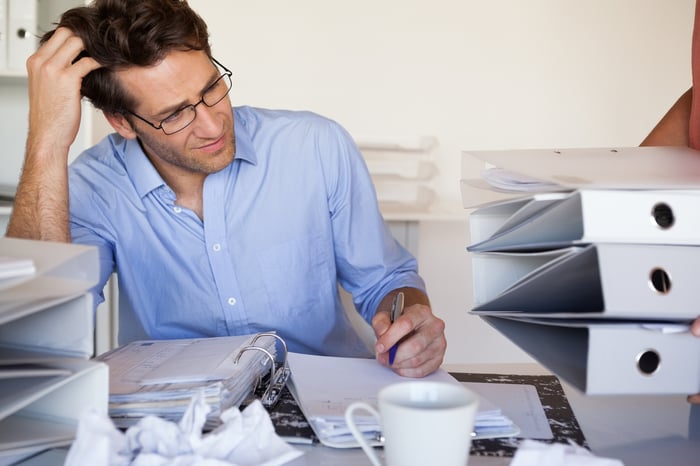 2. Having a messy workspace

When your desk is a wreck, it leads other people to believe that you're careless and disorganized. If you've been known to let paperwork pile up, and half-eaten sandwiches get buried under bunches of folders, it's time to do some serious cleanup, and then maintain a neat workspace going forward. For one thing, studies have shown that workers with clean desks are better able to focus than those with cluttered workspaces. But even if cleaning up your space doesn't cause your productivity to improve, it'll still make you look more responsible.

Many of us are wired to procrastinate, especially when it comes to tasks we'd rather not do. But the more you put off important projects, the more you risk missing deadlines and incurring your boss's wrath. A better solution, therefore, is to map out a timeline for the critical items on your to-do list, set key goals, and reward yourself when each one is met.

For example, if you're working on a presentation with 15 slides, set a reasonable timeline for completing the first three, and then give yourself some sort of treat for knocking them out, whether it's a cup of fresh-brewed coffee or a 10-minute breath of fresh air. Then, tackle your next set of three and do the same, and continue until you're done. Breaking up big tasks into smaller ones will make them seem more manageable, thereby making you less likely to procrastinate on them.

It's one thing to react unfavorably when your manager blasts you for something you didn't actually do wrong. It's another thing, however, to respond harshly or get defensive when your boss provides you with constructive criticism. When you respond poorly to feedback that's meant to help you improve, you come off as immature and unwilling to learn.

Rather than give that impression, get better at accepting criticism. Hear your manager out and express gratitude for having received the feedback at hand. At the same time, take that criticism to heart, because chances are, learning from it will only help your career.

Even if you're generally a strong performer at work, the wrong set of habits could hurt your chances of climbing the ranks. Rather than let that happen, pledge to put an end to the unfavorable behaviors you've been known to display. A little effort over the next 12 months could set the stage for a very rewarding year.