Please ensure Javascript is enabled for purposes of website accessibility
Log In Help Join The Motley Fool
Free Article Join Over 1 Million Premium Members And Get More In-Depth Stock Guidance and Research
By Maurie Backman - Jan 21, 2019 at 7:16AM

Many companies don't offer sick days, and as such, workers feel compelled to drag themselves into the office when they're clearly under the weather. Of course, coming to work sick is far from ideal, since it exposes others to germs and creates a scenario where a whole team could potentially be taken out by a single virus. But plenty of companies do offer sick time, and in those situations, it's easy enough for workers to take time away from their jobs in order to recuperate.

Now that remote work has become so commonplace, employees who have access to sick days often won't use them. Instead, what they'll do is ask for permission to work from home, and then push themselves to plug away at their laptops in between nose-blowing sessions and quick naps on the couch. 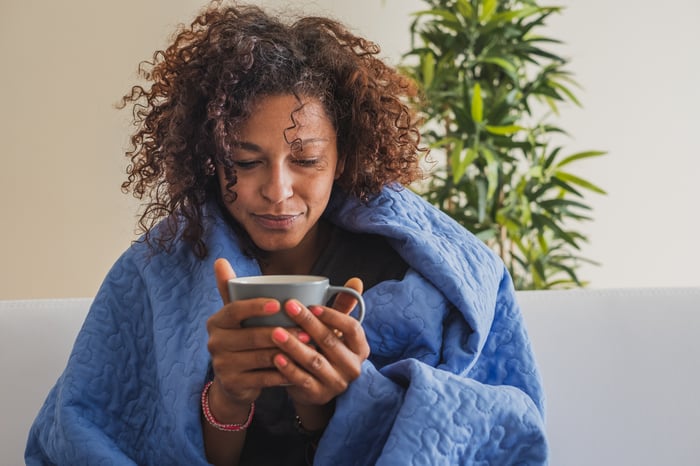 In some regards, the option to work remotely when sick offers employees and employers the best of both worlds. This way, total downtime is minimized, and workers with limited sick days don't have to worry about depleting their allotment prematurely. At the same time, it encourages employees not to come to the office sick, thereby sparing others.

When our bodies run fevers or produce more phlegm than any of us would like to acknowledge, it's their way of telling us we need to slow down and let ourselves recuperate. But working from home during a bout of illness often achieves the opposite goal. Sure, it's a far better bet than dragging oneself into the office, but when we think about it, the purpose of taking sick days should be to rest and recover. When we force ourselves to work during our sick days, we often prolong our illnesses and achieve the opposite effect.

Now, this isn't to say that allowing employees to work from home while sick is a bad idea. Rather, companies shouldn't expect workers to log on, check emails, or dial into conference calls when they're battling infections or grappling with nonstop coughing and sneezing bouts. They should, instead, encourage employees to focus on getting better during those days when they're inevitably forced to call out.

Of course, it's often the case that a given employee will be symptomatic of some type of illness or virus, but not downright miserable. For example, if someone is coughing, sneezing, and spewing mucous but mostly feels OK enough to work, there's no reason that person shouldn't log on from home. This way, assignments get done and colleagues avoid unwanted germs. But if that same employee is also running a fever and coughing intensely enough to come dangerously close to breaking a rib, it's a sign that he or she shouldn't be working from home, but rather, sleeping in bed until things calm down.

By being flexible with sick days, employers can help workers better manage their responsibilities and health simultaneously. The key, however, is to still allow for sick days in the original sense of the word.