In the not-so-distant past, interns were sources of cheap labor used to perform unpleasant tasks under the vague promise of learning something. Now interns aren't for getting coffee or picking up dry cleaning -- in most cases, they're students working as part of a program designed to help them develop actual skills.

Of course, that does not mean that the old type of internship has gone away -- there are certainly companies taking advantage of eager college students. But that type of internship won't be sanctioned by colleges, and the schools certainly won't help you find candidates. These days many colleges have offices designed to help students find internships, which are often done for class credit. But those placements come with certain requirements. In most cases, you'll have to actually have a program in place to teach and monitor your interns, reporting on their progress to the school. 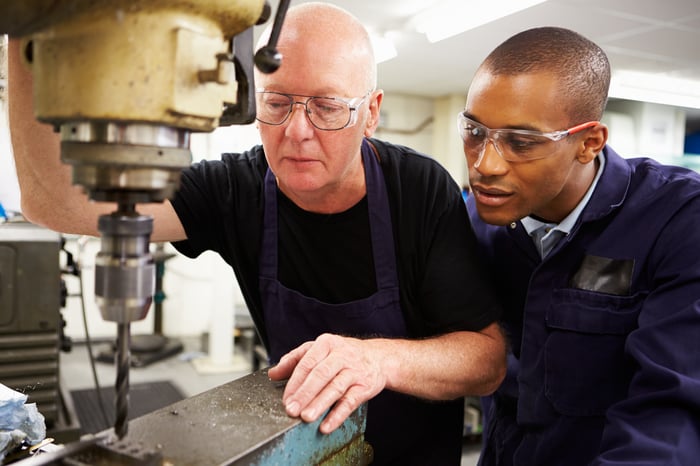 Interns may lead you to your next set of employees. Image source: Getty Images.

Under the old model, interns were essentially free (or at least cheap) labor whose efforts mostly benefited the company. If they learned something that was great, but it wasn't the point of the relationship as far as the business went. Interns worked hard, hoping to pick up some crumbs of knowledge and make useful connections.

Now companies generally have to pay interns, and the internships -- at least official ones through schools -- have to benefit the student. That generally means designing a program where the intern works with different employees to learn, or at least be exposed to, different concepts. The employer also has to fill out forms, meet with the student, and sometimes speak with a school adviser.

That description makes having interns seem like a hassle for a smaller company where the owner or manager already has a very full plate. If you take a short-term view, that may be the case. If, however, you take a long-term approach, offering internships can be a major positive for your company.

Think of interns as a way to recruit and train future employees. These may be your next set of seasonal helpers, summer workers, or even full-time employees. Hiring interns allows you to create relationships with workers who may never have considered applying to your company.

In a tough hiring market, building relationships matters. Consider internships a sort of extended professional get-to-know-you. You can test how the intern handles various situations, how they react to feedback, and whether they fit inside your workplace culture.

That may be the most important part. Someone can fake their personality during an interview, but that's much harder to during an internship. Hiring interns lets you get to know the worker, and the worker gets a chance to get to know you. That can lead to a strong partnership down the road.

Your interns may go on to become employees, or they can become professional contacts that you work with in other capacities. By taking the time and putting in the effort required to maintain a proper internship, you're investing in your company. You may not know exactly what you're getting -- and not every relationship will pay off -- but the overall impact should be positive and well worth your time.