Please ensure Javascript is enabled for purposes of website accessibility
Log In Help Join The Motley Fool
Free Article Join Over 1 Million Premium Members And Get More In-Depth Stock Guidance and Research
By Maurie Backman – Apr 1, 2019 at 7:18AM

Remote work arrangements are growing increasingly popular. Here's how to ask about one when interviewing.

When it comes to job interviews, there are certain actions you want to avoid. For example, it's usually a bad idea to bring up salary during an interview unless you're specifically asked to share your thoughts on the matter. Similarly, you'll want to avoid badmouthing your former (or current) employer during an interview, as doing so will make you look petty and unprofessional.

The topic of working remotely, however, is more of a gray area. These days, a growing number of companies are embracing the notion of telecommuting in an attempt to offer workers more flexibility. And if you're looking for a job that will allow you to work remotely, it pays to figure out whether that option is on the table before you get too deep into the interview process. The question is: When can you bring up telecommuting in an interview, and how do you do it? 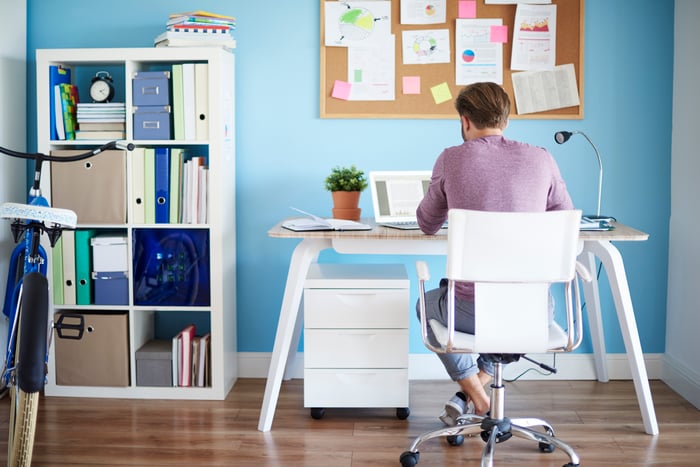 Do your research beforehand

Usually, you can get a sense as to whether a company is open to remote work arrangements by doing some research ahead of time. Job sites like Glassdoor, for example, publish company reviews, and if you read enough of them, you might come upon mentions of things like flexibility and working from home.

Of course, just because a company lets some workers do their jobs remotely doesn't mean you'll get that option. If you're seeking a management role, for example, the company might insist that you do your job onsite, since it'll involve overseeing other people. Still, it pays to go into the interview process with a basic sense of what the company might be open to.

Ask the question, but tread lightly

It's OK to ask about remote work arrangements in a job interview, but the key is to do so unobtrusively. A good way to broach the topic is to ask the question on a general basis, along the lines of: "Do most of your employees work full-time from the office, or is there a lot of telecommuting?" Posing the question this way will make it sound like you're asking from a place of curiosity rather than demand.

If your interviewer responds by saying that remote work is largely supported, you might choose to leave things at that. After all, if most of the company's employees get to telecommute, why would you be the one exception?

One final thing: While an interviewer might be somewhat non-committal about remote work during an initial meeting, once a job offer is presented to you, you have every right to ask that the company spell out the terms of its remote work policy as it will apply to you. This way, you'll be in the best position to decide whether to accept that job or go after a role that's more flexible.