We all go through periods where we have a hard time keeping up on the job front. But if you've been struggling at work for quite some time, it's crucial that you break that cycle. If you don't, your performance might really start to slip to the point where your manager has no choice but to let you go. Even if things don't reach that extreme, it's hard to feel content and satisfied with your work when you feel like you're barely hanging on. If that's where you're at, here are three critical moves to make immediately.

A mentor could be just the person to ground you and give you some clear direction. In fact, 76% of workers think having a mentor is important, according to a study by Olivet Nazarene University, and people with mentors are generally happier at their jobs than those without. 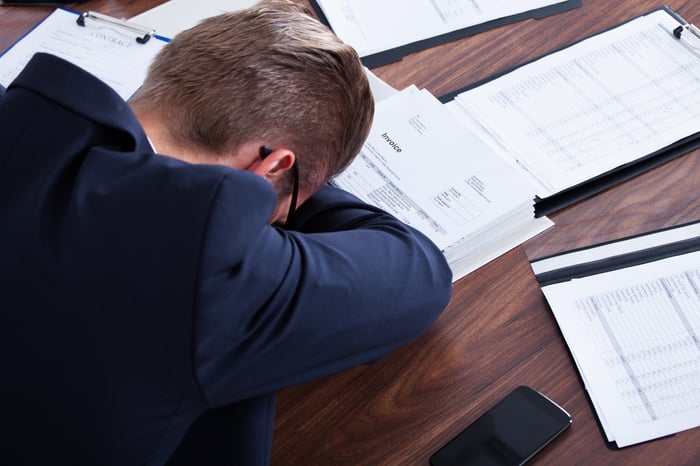 If your company doesn't have a mentoring program in place, start building relationships with seasoned employees you feel you can learn from, and see where things go from there. In the aforementioned study, 61% of mentor relationships developed naturally over time, so you don't necessarily need a formalized arrangement to benefit from someone else's expertise.

Keep in mind that your mentor doesn't necessarily need to work at your company, or even your industry. If you establish a relationship with someone who can help guide you, it almost doesn't matter what that person does for a living.

2. Fill in your knowledge gaps

If you're having a hard time at work, there may be a number of different reasons for it, but if part of that struggle stems from feeling like you truly don't know what you're doing, that's an issue you can address. First, pinpoint the skills or knowledge you're missing to excel at your job. Then, figure out what it will take to fill in those gaps.

For example, if you don't have the analytical skills many of your peers seem to possess, you might ask a colleague to spend a little time bringing you up to speed. Or, you might take a course on data analysis if it's an area you haven't previously dabbled in. The point, however, is to be proactive rather than resign yourself to consistently lagging behind.

3. Be open with your boss

Part of your manager's job is to support you at work when you're having a rough time. That said, your boss can't help if you're not honest about your struggles, so rather than bottle them up, ask for a meeting to discuss the elements of your job you're most stressed over.

Maybe you feel that the deadlines you're given aren't manageable given your workload and meeting schedule; or maybe you feel you were never trained properly for your role, and as such, are still unclear as to how to tackle certain tasks. No matter the case, looping your boss in is your ticket to getting his or her help, so don't keep your concerns to yourself for fear of judgment or backlash.

If you're struggling at work, don't let the cycle continue. Instead, seek help and knowledge to bust out of that rut and change your outlook for the better.