Please ensure Javascript is enabled for purposes of website accessibility
Log In Help Join The Motley Fool
Free Article Join Over 1 Million Premium Members And Get More In-Depth Stock Guidance and Research
By Maurie Backman – Apr 5, 2019 at 9:32AM

It's a frustrating situation. Here's how to cope.

There are certain types of co-workers who can really ruin your workday. Chronic gossipers, for example, can be a major distraction and pull you into conversations you'd rather not have, while know-it-alls can make you want to crawl under your desk and hide there indefinitely. And then there are the constant complainers -- the people who never seem satisfied and aren't shy about voicing their displeasure. If you're stuck working with one of them, here's how to cope.

Separating yourself from a perpetual complainer is a good way to reclaim a bit of your sanity. Therefore, think about the ways you might manage to distance yourself from that whiny officemate. You can ask to relocate your desk, for one thing. Or you might try altering your schedule so that your hours don't overlap quite as much. The more space you create, the less exposure you'll have to those constant gripes. 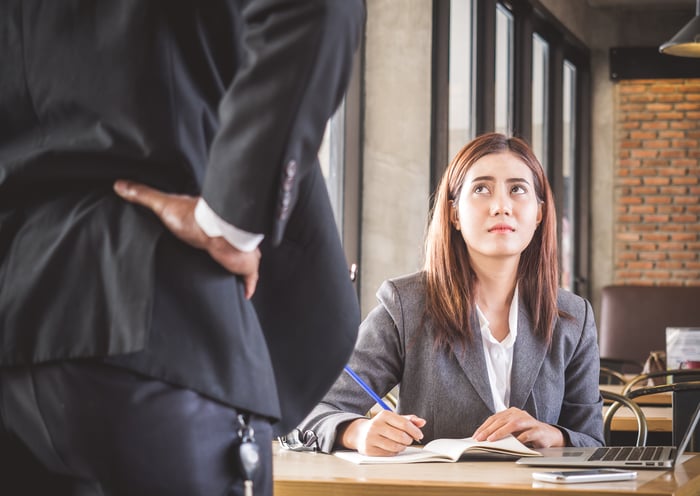 Maybe you can't physically distance yourself from the office complainer, but what you can do is change the topic when it turns overly negative. Granted, this may not work all the time, but if you manage to divert the conversation a few times a day, you'll avoid some of the negativity your co-worker is clearly trying to spew.

For example, if your colleague starts whining about deadlines, you might say, "I know, it's hard being under pressure, but did you see that announcement about the new vacation policy? How cool is that?"

3. Aim to identify an underlying pattern

Complaining is clearly an unfavorable trait, but before you give up on your whiny co-worker, try to see if there's a pattern to his or her displeasure. For example, if he or she often moans about having too much work and too many deadlines, it could be that your colleague feels overwhelmed or insecure. And if that's the case, you can offer advice on how to address those issues rather than continue listening to that person moan and groan all the time.

4. When all else fails, say that you've had enough

It's one thing to be a supportive colleague by listening to what your co-workers have to say and serving as a sounding board when they're clearly having a hard time. But there comes a point when you can no longer subject yourself to the same old complaints coming out of the same mouth all the time. If, despite your best efforts, you're unable to get a break from your perpetually displeased colleague, sit him or her down and have an honest conversation. Explain that the constant moaning is getting you down and that you'd rather not get sucked into a spiral of negativity.

But say so delicately and, if possible, offer to help. For example, you might say something like this: "I see that you're having a hard time at work, but your frequent complaining is getting me down. Is there anything specific I can help you with that might improve your situation here?" Of course, you'll need to be prepared to make good on that offer, but you're better off lending a hand than listening to nothing but grievances.

Dealing with a resident complainer is far from fun. If you can't avoid or minimize the problem, talk to your colleague and try to make a clean break. If anything, that might be just the wake-up call he or she needs to stop moaning and start having a better attitude at the office.