Consider this your much-needed wake-up call.

In many workplaces, irksome colleagues are par for the course. But what happens when that annoying co-worker at your office is you?

You may not realize it, but certain behaviors on your part could drive your colleagues downright crazy. Here are a few ways you might be aggravating the daylights out of the poor souls who have no choice but to work alongside you.

It's one thing to moan about a pressing deadline or exceedingly boring project. But if the majority of the statements that come out of your mouth are negative in nature, it's apt to bring your co-workers down. Therefore, give yourself an allowance of two or three complaints per day, and then promise to stop spewing negativity once you've reached that point. Or at the very least, complain separately to different people so that you're not burdening the same folks with your constant gripes. 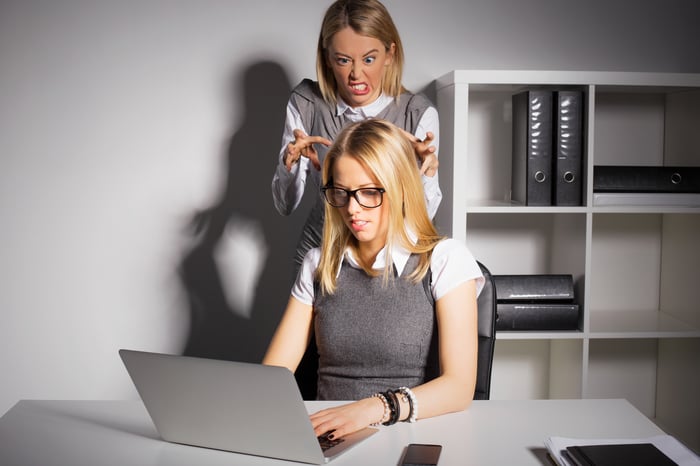 2. Scheduling meetings first thing or late in the day

Though meetings are often an unavoidable part of office life, if you're the one scheduling them, you do have the option to do so courteously. And if you're not exploring that option, you're creating a scenario where your colleagues might come to hate you just a little bit.

Asking people to show up for meetings at 9 a.m. is usually a good way to get on their bad sides, as is scheduling meetings for late in the day when the meetings are likely to run over and cause everyone to get stuck at the office late. Therefore, be strategic when insisting that your peers attend meetings. And if you're going to schedule them during lunch, be prepared to serve food.

Though email is a perfectly acceptable forum for short- to medium-sized messages, perpetually writing a book over email is a good way to annoy your colleagues. If you have a lot of information to share at once, scheduling a meeting or brief conference call is usually a better bet.

Another option? Break really long emails up into several messages but space them out so you're not bombarding your co-workers too much in a single afternoon. And if you really must send long emails, break up your text with different paragraphs and bullet points to make that content easier on the eyes.

4. Abusing the "reply all" feature

Right up there with exceedingly long emails, abusing the "reply all" function is another faux pas you should aim to avoid on the electronic communication front. Most of the time, there's really no need to include 47 other people on a response to a group message, especially if all you're saying is something along the lines of "noted" or "will do." Therefore, look and think carefully before you invade dozens of inboxes for no good reason.

You might think that by coming to work sick, you're doing your colleagues a favor by ensuring that they're not forced to pick up your slack. In reality, you're probably only incurring their wrath. Most people would much rather have to pitch in on a few extra tasks than risk exposure to unsavory germs that land them in bed with a fever, so don't be that person who infects everyone else and angers them in the process. Instead, stay home when you're ill, recover, and thank your co-workers for their support and assistance after the fact.

The last thing you want is to be that co-worker who everyone else thinks poorly of. Avoid these mistakes, and with any luck, you won't inadvertently wind up driving your colleagues over the edge.