Please ensure Javascript is enabled for purposes of website accessibility
Log In Help Join The Motley Fool
Free Article Join Over 1 Million Premium Members And Get More In-Depth Stock Guidance and Research
By Maurie Backman - Jul 1, 2019 at 8:47AM

New fathers shouldn't be left out in the cold.

When we hear or read about insufficient parental leave, we tend to picture new moms struggling to manage recovery and child care, all the while ramping back up at work. But it's not just mothers who want, or need, better parental leave; fathers find it just as important.

In fact, according to Indeed.com, upon learning that they were expecting, 44% of fathers were concerned about the amount of paternity leave they'd get. Furthermore, while the average new dad was able to take seven weeks of parental leave, 10 weeks was the average amount of time fathers felt they needed. 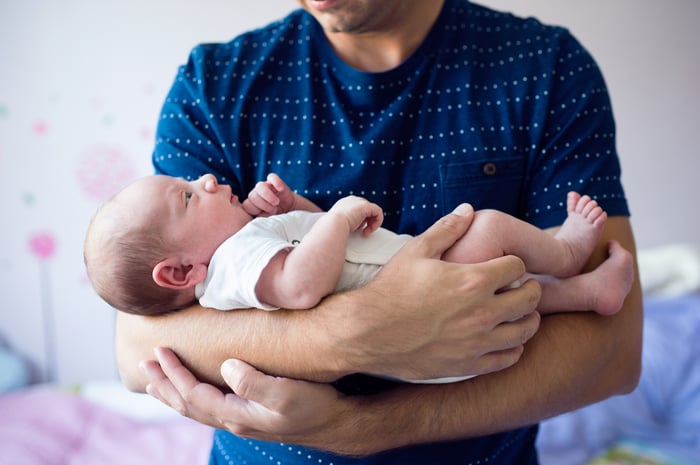 And let's not confuse general leave with paid leave. On average, fathers received just 48% of their pay while out on parental leave.

If your company's parental leave policy leaves much to be desired for dads, it's time to rethink that benefit. Otherwise, you may end up losing out on valued employees, or alienating the new fathers who do stick around.

Clearly, fathers of newborns don't go through the same physical effects as the women who actually birth children. But that doesn't mean they have it easy.

According to the parents surveyed by Indeed.com, dads work 16 weeks on average before their new babies begin sleeping through the night. And dragging through the workday on a couple of hours of sleep (and not necessarily consecutive ones at that) hardly makes for a pleasant or productive experience.

Furthermore, dads are often needed at home in the weeks following the arrival of a baby to help care for that child, other children, or moms whose recoveries don't go so smoothly. Additionally, not all babies come home from the hospital within a few days of being delivered. Those with health issues often require hospital stays, which can be taxing from a scheduling perspective.

That's why it's important for companies to recognize that fathers need time to adjust to their new family dynamic, and to offer parental leave policies that reflect that. This means giving dads ample time off immediately following the birth of a child, but also giving them some flexibility once that leave wraps up. In fact, 80% of first-time dads say they'd really benefit from more flexibility on what time they're allowed to show up at work in the morning, and it stands to reason that a father who was kept up the entire night might appreciate the option to come into the office a bit later than usual.

Also, let's be clear: The last thing new parents need is a decline in income at a time when they're introducing a new baby -- and a host of expenses -- into their personal mix. As such, aim to offer as much paid time off as your company can swing.

In addressing the needs of new fathers, your company can not only retain key talent, but also attract new talent as the need arises. So take a long, hard look at your current parental leave policy, and if it's not up to par, institute a revamp -- before you lose out on employees you can't afford to part with.