Please ensure Javascript is enabled for purposes of website accessibility
Free Article Join Over 1 Million Premium Members And Get More In-Depth Stock Guidance and Research
By Maurie Backman - Jul 9, 2019 at 8:09AM

Nearly 16% of teachers are forced to get a second job just to pay their bills.

These days, it's not uncommon for workers to pick up a side hustle in an effort to boost their personal cash flow. For some, that means putting in a couple of extra hours a week. For others, it means spending every single weekend waiting tables, working a cash register, or hammering away at a side business. And while people across a wide range of income levels are motivated to get side gigs, there's one profession where they're particularly popular: teaching.

Roughly 16% teachers have to take a second job to make ends meet, according to the Pew Research Center. That's about three times the national average for all professions. 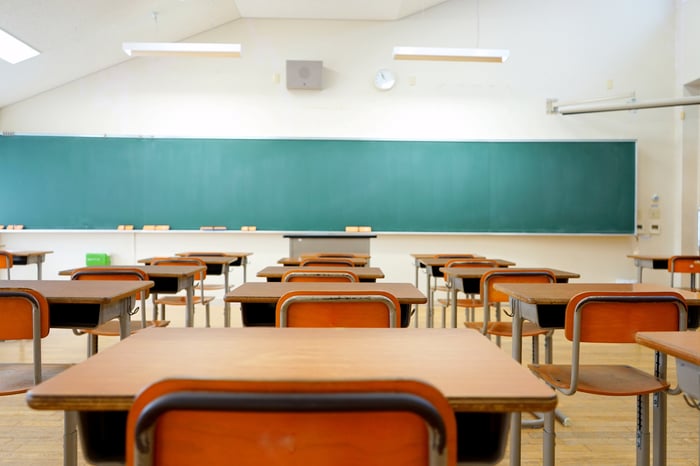 In fact, teachers make an estimated 19% less than workers with a similar level of education, according to the Economic Policy Institute. Even when those figures are adjusted to account for benefits, which teachers typically get, educators still earn 11% less than their comparably qualified counterparts.

And it's not just that teachers start out with lower salaries. Often, they face many obstacles in the course of growing their pay -- namely, state and local budget caps that limit their upward mobility on the wage front. Obtaining additional degrees or certifications can help boost teacher income in some cases, but those endeavors come at an added cost that many teachers simply can't afford. Thus, many teachers have to do the impossible -- perform their jobs inside the classroom, contend with the behind-the-scenes work their jobs entail outside the classroom, and swing side gigs to ensure that they don't fall behind on their bills.

Earning more money as a teacher is hardly a simple matter. You can't just march into your principal's office, demand a raise, and expect an instant bump in pay. But that doesn't mean you're completely out of options, either.

For one thing, read up on local teacher incentive programs. Some districts operate programs that reward teachers financially when their efforts result in higher student performance, as measured by standardized tests and other such data.

Additionally, look into professional development programs that can result in pay boosts. Spending a few hours or days growing your skills could help your income improve.

Furthermore, do some research as to which districts in your geographic region pay better than others, and see about getting hired there. Granted, that's not always an easy thing to do, but it's worth looking into. By the same token, it might pay to relocate to a higher-paying school district, or even a different state where teacher salaries are more competitive across the board.

Being a teacher is hard enough work on its own. If you spend your days dealing with noisy, rowdy children and the bulk of your evenings on lesson plans, homework-grading, and administrative work, then the last thing you want to do is feel compelled to take on a second job. But if your salary doesn't suffice in paying the bills, you're better off going that route than landing in debt. And the good news is that being a teacher qualifies you for a number of lucrative side hustles. Swinging them during the year may not be feasible, but if you're off for the summer, you do have options for earning some extra cash.