Employees around the world place a heavy value on a company's workplace and culture, according to a new survey from Glassdoor, a job and recruiting website.

Over 5,000 respondents from the United States, United Kingdom, France, and Germany participated, with 77% saying they "would consider a company's culture before applying for a job there," while 56% said that "culture is more important than salary" when it comes to job satisfaction. Defining that culture is difficult, but it's clearly important to employees.

"Having a compelling mission, culture and values are critical when it comes to attracting and retaining top talent in a competitive job market -- it is what differentiates each and every employer," said Glassdoor President Christian Sutherland-Wong in a press release, adding, "Job seekers want to be paid fairly but they too want to work for a company whose values align with their own and whose mission they can fully get behind." 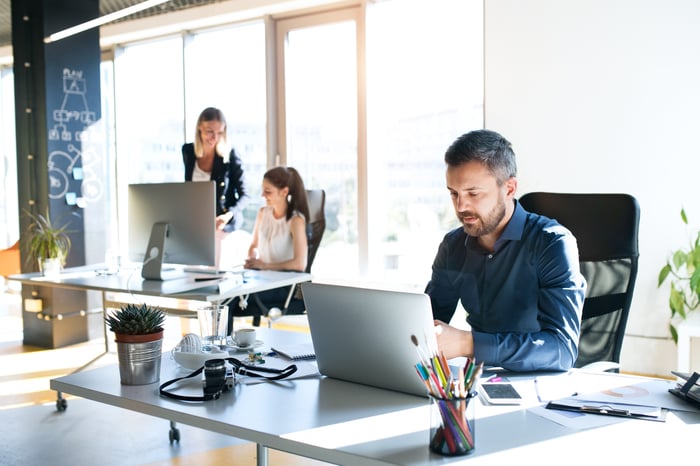 What did U.S. workers say?

Workers in all four countries clearly place a high value on company culture, and the U.S. was no exception. Over half (58%) of the Americans surveyed said they consider culture more important than salary when it comes to deciding where to work. More than two-thirds of U.S. respondents (70%) said they would not apply for a job at a company "unless its values align with their own personal values."

In addition, 80% of U.S. respondents said that they consider a company's mission, and 64% said the right culture would be one of the key reasons they stay at a job. Younger Americans (18-34 years old) were most likely (65%) to value culture higher than salary.

This data makes it clear that in a competitive job market, in which workers have more choice than they have traditionally had, companies have to do more. Money matters, but paying a little more may not help a company land the employees it needs.

Culture is a long-term investment that starts from the top down. A company has to make a commitment to creating a positive environment for workers, and doing that generally involves talking to employees.

Creating that positive environment isn't an easy thing to accomplish. It's not unheard of for companies to say the right thing while doing something else. Some technology companies, for example, were built on a tradition of positive culture but lost some of that as work demands piled up.

To maintain a positive workplace culture, a company has to continually evaluate its operations. Working hard isn't a culture killer, but pushing people too hard for too long can be. Avoiding that requires open channels of communication to make sure that employees not only feel valued but feel that their work will have a positive impact.

In a thriving job market, workers have more choices -- even at the lower end of the pay spectrum. If most major retail chains start cashiers or warehouse workers at $13-$14 an hour, then the employee will almost certainly pick the company with a stronger culture.

Of course, culture means different things to different people, so employers have to be vigilant. One group of workers may value the opportunity to advance over all else, while others may prize working for a company that's socially conscious. Other workers might appreciate a relaxed dress code or an emphasis on proper work/life balance. Most will likely use a mix of criteria to reach their own conclusion on culture.

It's a moving target that companies can hit if they listen to employees at all levels and implement the things that matter to employees. That's no easy feat and it's a never-ending investment, but this data shows that companies have no choice but to make culture a key focus.