Please ensure Javascript is enabled for purposes of website accessibility
Free Article Join Over 1 Million Premium Members And Get More In-Depth Stock Guidance and Research
By Maurie Backman - Jul 19, 2019 at 8:36AM

Younger workers are more open to sharing salary information than older ones, but there are pros and cons to discussing compensation.

In today's age of oversharing, you'd think money would be a topic that people commonly discuss. But that's not so. Many people shy away from talking about money, largely for fear of being judged, feeling inadequate, or getting taken advantage of.

But when it comes to talking salary, the rules might be a little different -- at least as far as younger workers are concerned. A good 29% of millennials say they're willing to discuss their salary with a co-worker, according to a new Finance Buzz survey. By contrast, only 21% of Gen Xers are willing to do the same.

Similarly, 60% of millennials say they're open to sharing their salary with a close friend. But only 49% of Gen Xers feel comfortable doing so. 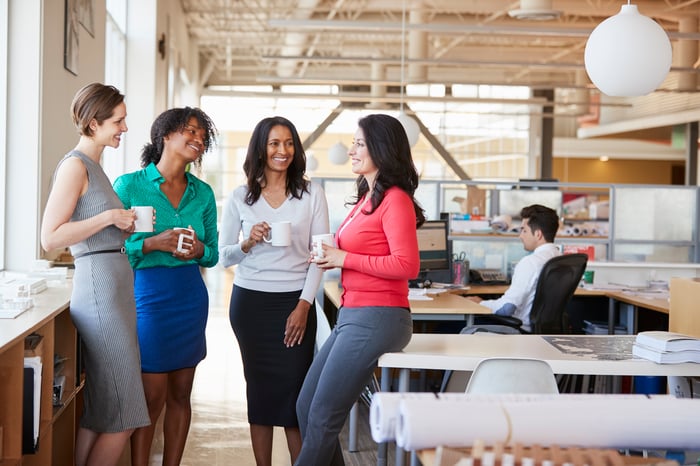 On the one hand, millennials might have the right idea. There are benefits to discussing salary information, both with colleagues, as well as with friends. Still, salary is a topic to address with caution, especially in a workplace setting.

The pros and cons of talking salary

One benefit of discussing salary information with your peers is the ability to assess your earnings and see if they're on the mark. You might think you're being paid fairly, but if you learn that your co-workers with similar job descriptions are making much more than you are, it could be the push you need to fight for a raise.

At the same time, sharing salary information might help you feel better about your paycheck. If you're convinced you're underpaid but learn that many of your colleagues are compensated similarly, it could change your job-related outlook for the better.

Still, talking salary can be a dangerous thing, especially in a workplace setting. If you talk numbers and your co-workers discover that you're paid more than they are, it could lead to instant animosity and a host of strained relationships. And that could make for a very unpleasant working experience.

Furthermore, many companies have policies that prohibit colleagues from sharing salary information with one another. Be sure to become familiar with your employer's stance on the matter before you face disciplinary action for opening up your mouth.

Of course, talking salary with friends is a less precarious prospect because if you don't work for the same employer, you won't have to worry about the aforementioned repercussions. However, in doing so, you'll risk having your friends see or treat you differently, or vice versa.

For example, if your friends discover that you make thousands more than they do, they may start expecting you to pick up the tab for dinner or cover other costs you'd normally split evenly. And that's hardly fair to you.

The punchline? If you're going to be open about salary, choose your audience wisely, and for the love of job stability, make sure that discussing those details doesn't put your employment at risk. If you're careful in your approach to talking salary, it could end up being an eye-opening experience that prompts you to push for change for the better.