Please ensure Javascript is enabled for purposes of website accessibility
Log In Help Join The Motley Fool
Free Article Join Over 1 Million Premium Members And Get More In-Depth Stock Guidance and Research
By Maurie Backman – Aug 5, 2019 at 6:08AM

Here's some expert advice to get your business off the ground.

If you've ever watched an episode of Shark Tank, you know that investor and FUBU founder Daymond John strongly believes in helping small businesses succeed. John regularly volunteers his time to offer guidance and mentorship to entrepreneurs. And this summer, he's on the road with JPMorgan Chase for its annual Chase for Business Conference series.

Last year, JPMorgan Chase announced it would be doubling its investment in the Small Business Forward initiative to help small businesses run by women, minorities, and veterans. In an age when community banks are disappearing, that's positive news. And as someone who believes in making capital accessible to underrepresented businesses, John is proud to be a part of it. He's also happy to dish out advice on how to secure and manage funding when you're building a business from the ground up. Here are some pointers he shared in an email interview with The Motley Fool. 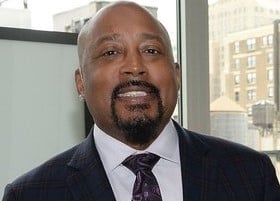 If you're going to ask someone to invest in your business, you need to be clear on what your financial picture looks like, and grounded on what your company is worth. "I can't tell you how many entrepreneurs still walk into the Tank without knowing their numbers," Daymond John says. "You should know your financials like the back of your hand."

But don't just throw numbers out there -- make sure you can back them up. Be prepared to talk about what your sales and margins look like, and also be clear on why you're seeking funding and what you plan to use that money for.

You never know where funding for your venture might come from. John is a firm believer that small-business owners should always be networking. As he puts it, "Networking has played a huge role in my success, and I am constantly encouraging aspiring entrepreneurs to tap into OPM: other people's money." To this end, John encourages small-business owners to get out there, whether it's going to tradeshows, attending conferences, or engaging on social media.

Establishing mutually beneficial relationships is also important. "Go out and find people in your community or your industry," John advises. "Barter with them, create opportunities to cross-promote, and take advantage of each other's communities. Everybody wins, and, hopefully, it won't cost you a dime."

Furthermore, don't wait until you're in a position where you need business funding to start building relationships. "Think of it this way," John says, "would you want to hand over a million-dollar check to someone who sent you a cold direct message on LinkedIn? Or would you want to give that same million-dollar check to someone you have known for two years, you talked with several times, and you know is a trustworthy person?"

3. Be careful with your own money

It's not uncommon for small-business owners to invest a large chunk of their own money into their ventures. But proceed with caution. John advises new business owners to set a limit in advance for pulling from personal capital to avoid going overboard. At the same time, he encourages entrepreneurs to do the math on:

Some businesses are fortunate enough to secure additional funding after a successful initial round. But there's a danger in having access to too much capital, John warns, because it often tempts business owners to think too big.

Additionally, John encourages business owners to think about how they're spending the money they get. "Make sure that you are investing funds in the area of your business that will help you both nurture the business and propel growth," he says. "Don't forget, no matter where or from who you get the investment, they will be looking for a return."

Programs like Chase's Small Business Forward didn't exist when John was first starting out, or if they did, he wasn't aware of them. But today, there are numerous small-business initiatives and free resources available to entrepreneurs, so make an effort to look for them. Additionally, John recommends finding a mentor. "But don't think that your mentor has to be a celebrity or a Shark," John says. "Take advantage of the people around you and in your community." You can also get advice from John himself through his Daymond on Demand program.

6. Exercise the power of broke

In some ways, starting a business on a limited budget can be a major advantage. As John says, "When I was starting FUBU, my partners and I had no choice but to exercise the power of broke. We had to get creative, network, and take advantage of the amazing community around us." In other words, don't wait for a windfall to land in your lap. Keep pushing, and use your financial constraints as an opportunity to do something big with the limited resources you have.