Please ensure Javascript is enabled for purposes of website accessibility
Log In Help Join The Motley Fool
Free Article Join Over 1 Million Premium Members And Get More In-Depth Stock Guidance and Research
By Maurie Backman – Aug 15, 2019 at 9:18AM

Meetings may be a necessity -- but they shouldn't be a waste of everyone's time.

Like them or not, meetings are an integral part of Corporate America. And if you're on the scheduling side of them, you're probably aware that invitees are typically less than thrilled to be summoned to a conference room to review whatever matter warrants a group discussion. But if you make an effort to run your meetings more efficiently, you'll have less resistance from the people involved in them. Here are three ways to achieve that goal -- and be that person whose workplace meetings aren't a glaring waste of time.

If you're going to hold a meeting, it pays to do so at the right time -- meaning, at a point in the day when you're likely to hold attendees' attention. Early morning meetings can be disastrous, so it helps to avoid them if possible. When you schedule a group sit-down for 8 a.m., you risk having people show up late, while the other half sit in a half-dazed state waiting for their coffee to kick in. The same holds true for late-day meetings -- you risk losing people's attention as they sit there nervously checking their watches and train timetables, eager to get out the door. 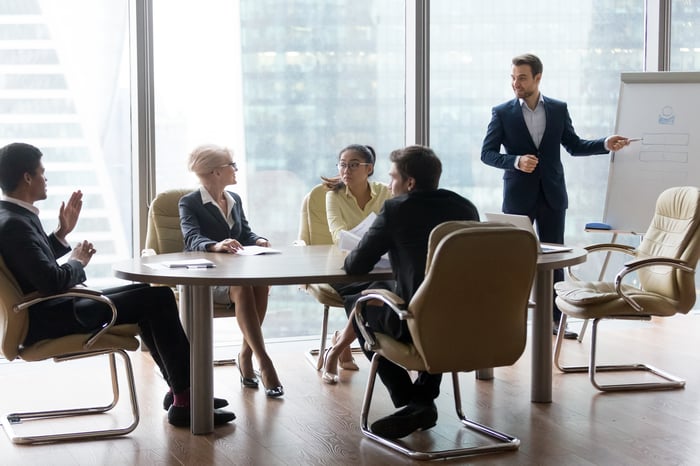 A better bet? Choose a more neutral time for your meetings, like mid-to-late morning or afternoon. Lunchtime meetings also aren't ideal, because the last thing you want is the distraction of people chomping on salads and sandwiches while you're trying to share information. And don't schedule meetings right before a holiday weekend -- chances are, people will be more focused on their plans than on the words coming out of your mouth.

You can only include so many people in a conversation before it becomes unproductive. If you're planning a meeting, think about your invitees, and aim to whittle that list down to the bare minimum. Remember, it's possible to sit down with key players only, hash things out, and then send out a recap or update looping the rest of your team in after the fact.

3. Map out an agenda in advance

Your meetings will run more smoothly if you have a clear plan of what needs to be discussed, and in what order. To this end, it's really helpful to write up an agenda, circulate it to your attendees in advance, and insist that if anyone has anything to add, you be notified ahead of time. Having an agenda will help you stay on course and ensure that the most pressing items on your list are addressed during that sit-down. Or, to put it another way, the right agenda could spare you and your team from having to attend another meeting on the same topic.

Meetings are often a necessity at work, but there's a right way and a less ideal way to conduct them. If you're the one tasked with holding meetings, it pays to run them efficiently. That way, you'll get less pushback the next time you're forced to gather people in a room.