Please ensure Javascript is enabled for purposes of website accessibility
Log In Help Join The Motley Fool
Free Article Join Over 1 Million Premium Members And Get More In-Depth Stock Guidance and Research
By Daniel B. Kline – Aug 25, 2019 at 7:10AM

Some use aliases, others try privacy settings, and 50% don't think companies should be allowed to look.

Worried that a nearly innocent photo of you having a little too much fun at a wedding or a post that's political or maybe a bit R-rated might keep you from getting hired? You aren't alone.

Most workers believe that social media can impact hiring decisions, and many have gone to at least some lengths to protect themselves, according to a new survey from JDP, a company that provides employment screening.

Over 8-in-10 (84%) of the 2,007 American adults surveyed in mid-July said they believe social media impacts hiring decisions. Half (50%) feel that companies should not be allowed to check their social media, and many (82%) have at least taken some steps to keep their accounts private. 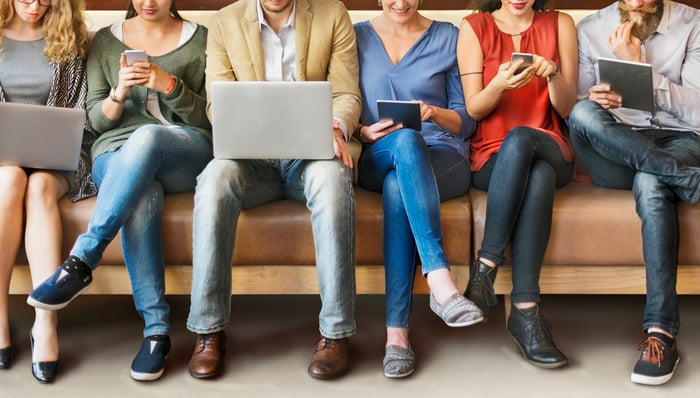 Workers are concerned about employers seeing what they post on social media. Image source: Getty Images.

Technology has made once-private moments public -- at least if you don't take steps to keep them from unwanted eyes. There are a number of ways to do that, though neither is foolproof -- if anyone can see your images or posts, then that person or people could share them, record them, or post them elsewhere.

That has led 43% of survey respondents to make at least some of their social media private from employers and coworkers. A similar amount (40%) admitted that they have used alias accounts (an account under something other than their own name) to post without fear of being discovered by a current or potential boss.

"Almost half of respondents (46%) said they've plugged their names into a search engine and further concealed their social media presence based on what they found. Facebook was home to the most incriminating material," according to the survey.

Manage your social media as if anything you post could be seen by people who you may not want to see it. Use privacy settings to protect yourself as much as you feel necessary but recognize that if you post something, it's out there and it could be seen.

Make sure you have a LinkedIn profile that's up-to-date and fully professional. That Microsoft-owned company is built around featuring your resume and work connections. Your other social media can be more personal, but you may be judged for it.

It's not fair for an employer to infer things about you because you share a Sarah Silverman post or pass on something Larry the Cable Guy said, but it might happen. Understand that your actions on social media that aren't behind a privacy wall are fully transparent.

If you have a job, it's also important to understand your company's social media and other policies. If, for example, you're not allowed to drink in the office, you may want to avoid posting pictures of yourself doing shots in the break room.