As a manager, one of the hardest things you might ever have to do is let an employee go. And while it's one thing to lay someone off when downsizing mandates come from above, it's another thing to fire someone for poor performance.

But if you have an employee who's been falling down on the job and pushing your buttons, you may have no choice but to give that person the ax. Here are a few signs that a worker on your team just plain needs to go.

1. Your employee refuses to listen

An employee of yours might make mistakes somewhat frequently or botch major assignments and presentations. But if that employee messes up because he or she repeatedly fails to follow clear directions, you may be better off cutting your losses, letting that person go, and hiring someone else who is able to pay attention to instructions. 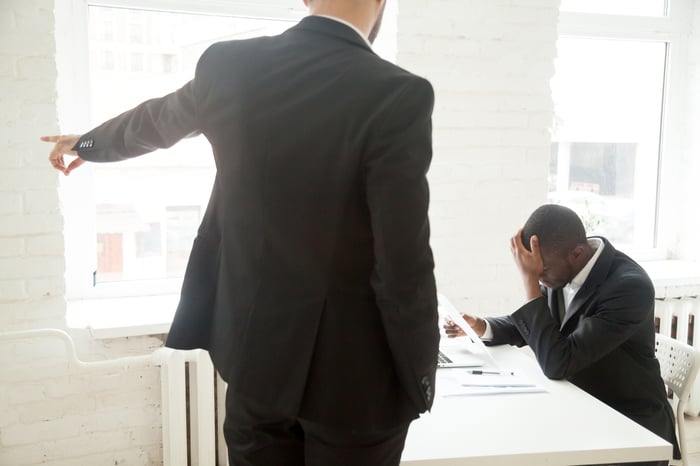 It's never easy to get negative feedback at work. But if you have an employee who won't accept criticism that's fair and constructive in nature, then he or she may not have the emotional maturity needed to thrive and grow professionally. As such, you may have to let that worker go.

3. Your employee makes no effort to improve

An employee who fails to meet expectations might apologize for failing and nod politely when you offer up feedback. But if it's clear that he or she isn't willing to hustle to do better on the job, then you may have to replace that employee with someone who's capable of contributing meaningfully to your team.

4. Your employee shows up late all the time

Commuting snags happen from time to time, whether it's unusual traffic or public-transit meltdowns. But if you have an employee who never seems to make it to the office on time, it's a sign that he or she just isn't committed to being reliable. And that means you're probably better off finding a replacement who is willing to set an alarm 20 minutes earlier to avoid being tardy.

5. Your employee is rude or uses inappropriate language

Sometimes, people say nasty things at work when they're stressed or caught off guard. But if you have an employee on your team who frequently uses foul or disrespectful language toward you or his or her colleagues, then you may want to consider terminating that worker's employment -- especially if you've repeatedly emphasized the importance of cleaning up his or her act.

Maybe you have an employee on your team who tries to do a good job but whose lack of skill renders him or her ineffective and unproductive. Even if that employee has a good attitude, you may have no choice but to give him or her the boot if the work he or she is responsible for just isn't getting done.

It's never easy to fire someone, but sometimes, it has to be done. And while recruiting replacement workers can be frustrating and time-consuming, the upside is that you'll have an opportunity to replace a poor performer with someone who has the ability to help your team meet its goals.