Please ensure Javascript is enabled for purposes of website accessibility
Log In Help Join The Motley Fool
Free Article Join Over 1 Million Premium Members And Get More In-Depth Stock Guidance and Research
By Maurie Backman - Updated Nov 8, 2019 at 7:42AM

Interested in working for yourself? A survey offers some insights on what to expect.

Chances are, you know at least a few people who work on a freelance basis. And maybe you're considering it yourself. Though there are challenges associated with not being a salaried or permanent employee, freelancing offers plenty of perks as well. Recently, FlexJobs conducted a freelancer survey and uncovered the following.

1. There are more female freelancers than male

Though the freelance lifestyle no doubt appeals to men and women alike, in the aforementioned survey, almost 74% of respondents were women. Part of this trend could boil down to the fact that women are more likely to be caregivers, and as such, need flexibility in their schedules, which freelancing allows for. If you're struggling to juggle family and job-related responsibilities, it pays to see if freelance work makes your schedule more manageable. 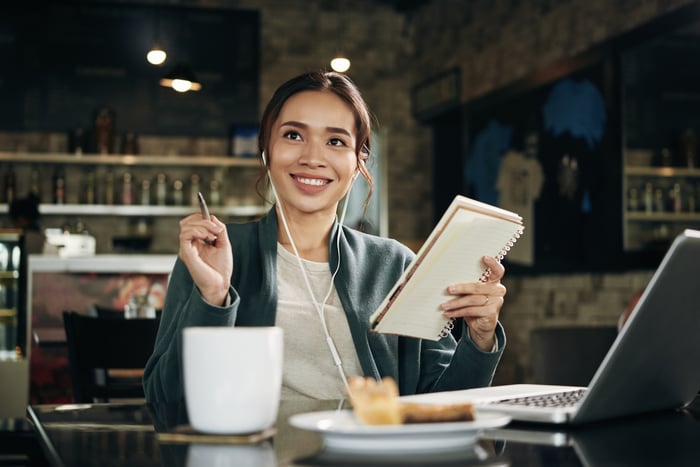 2. Freelancers are often supplementing their income

Though many people are full-time freelancers, FlexJobs reports that almost 58% do it to supplement an existing paycheck. Of course, juggling full- and part-time roles simultaneously isn't easy, but given that freelance works lends to flexibility, it's a good option to consider if you need money to boost your savings, pay off debt, or meet another important goal.

3. They clock in a lot of hours

Freelancers sometimes get a reputation as folks who work when they want to. But when asked how many hours a week they clock in, the most popular answer in the aforementioned survey was 41 hours or more. That's easily comparable to salaried employees, and part of the reason could be that freelancers don't get paid to take lunch breaks or breathers during the day. They're paid by the hour or by the project, and as such, often need to hustle to earn the income they want. By contrast, only about 11% of freelancers do that work for 16 to 20 hours a week, which aligns more with a part-time job.

4. Managers can freelance, too

Workers at all career levels can pursue freelance arrangements. FlexJobs reports that most of the freelancers it surveyed are at what it calls the intermediate career stage -- not entry-level, but not management. Furthermore, nearly 19% of freelancers hold management-level jobs.

Some people get stuck freelancing in the absence of finding a full-time job. But 45% of those who freelance actively choose it because they like the lifestyle, flexibility, and opportunities.

Though freelancing seems to be growing in popularity, it's not a passing trend. Over 60% of freelancers plan to maintain that setup for the long haul -- specifically, more than five years. And that speaks to their overwhelming satisfaction.

7. Freelancing and working from home tend to go hand in hand

Some freelancers regularly report to their clients' offices, but the majority -- almost 85%, according to the survey -- are able to do their jobs from home. If you're eager to work from home, whether to save money on commuting or child care or simply because you want to, then it pays to see what freelance opportunities are available in your current field or perhaps a new one.

To see if freelancing is right for you, a good bet may be to start out part time to assess whether it's a viable means of earning money. That way, you'll have a better sense of what you're getting into if you do it full time.