Please ensure Javascript is enabled for purposes of website accessibility
Log In Help Join The Motley Fool
Free Article Join Over 1 Million Premium Members And Get More In-Depth Stock Guidance and Research
By Maurie Backman - May 9, 2020 at 8:54AM

Talk about a sobering statistic.

COVID-19 has been battering the U.S. economy since mid-March, and the labor market has suffered exponentially. An estimated 20.5 million Americans lost their jobs in the month of April alone, boosting the country's unemployment rate to an astounding 14.7%. In fact, unemployment hasn't been this bad since the Great Depression.

A devastating series of events

Back in March, state and local governments began imposing stay-at-home orders to promote social distancing -- a move health advocates insist is essential to curbing the spread of COVID-19. As such, any business deemed non-essential was effectively forced to close, thereby leading to millions of layoffs in a short period of time.

Gig economy workers have been struggling, too. Those who drive for a living, for example, aren't seeing their usual customer flow. How could they, when everyone's being told to stay home? And because larger companies are cutting expenses, independent contractors have become increasingly expendable. 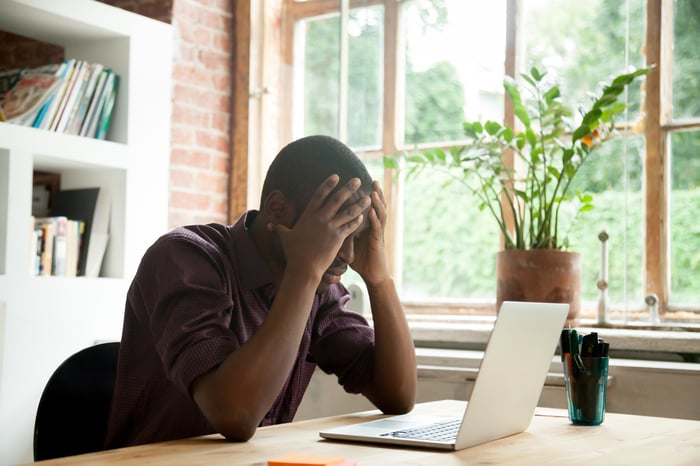 Will opening the country turn things around?

As more and more states begin to reopen, some experts are cautiously optimistic that job growth will pick up. But right now, many of the non-essential businesses that are starting to open are doing so at limited capacity and with restrictions. As such, many won't be ready to fully rehire staff and will be looking to cut as many corners as possible to compensate for the losses that ensued when they were shut down for well over a month.

Furthermore, customers may be wary of frequenting non-essential businesses, thereby slowing the economy's recovery. Though many Americans are indeed itching to leave the house, there's still an element of fear at play. As such, a restaurant that opens this week with outdoor seating may not see the rush of diners it expects, and salons may find that their regulars still aren't scheduling appointments.

There's a second wave of COVID-19 to worry about, too. As more states open up, health experts fear that cases will begin to escalate. Once that happens, we're back to square one -- businesses will need to close their doors right away, and workers will once again find themselves on the chopping block.

There's relief, but is it enough?

Thankfully, the government has stepped up to provide relief to out-of-work Americans. Under the CARES (Coronavirus Aid, Relief, and Economic Security) Act, unemployment benefits got a $600 weekly boost and were extended by 13 weeks, while two separate rounds of funding made over $600 billion in forgivable loans available to small business owners. And let's not forget the $1,200 stimulus checks that have been going out to Americans since April.

Still, Americans are apt to need a lot more help if the COVID-19 crisis drags on into 2021 or if things improve but then backslide following a second wave of infections. There are already additional relief packages being proposed, including the Emergency Money for the People Act, which would pay eligible Americans $2,000 a month for at least six months and possibly up to one year. But right now, that may not be much consolation to the millions of Americans who are living through an ordeal they never thought they'd experience in their lifetimes.