For investors, 2013 was one of the best years in recent memory. The S&P 500 climbed 29.6%, its best year since 1997, while the Dow Jones Industrial Average climbed just under 30% for its largest one-year jump since 1995.  Even the Nasdaq composite got in on the action, with its 38.3% gain the seventh-largest ever for the index. Finding investment strategies in 2014 that will both protect big gains from last year, while also maximizing return going forward is an important consideration. Let's take a look at a proven strategy that not only may be the best of investment strategies for 2014, but could be the ideal way to invest in any market, in any year.

You can't time the market; you won't win
The first thing to accept about investing in the stock market is the following four things:

Take a look at this chart for some long-term context: 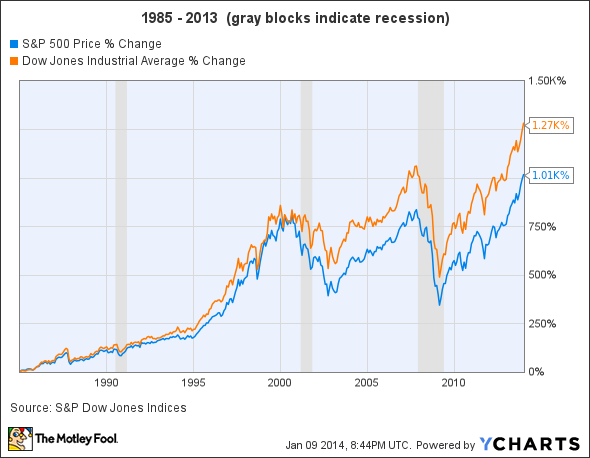 As you can see, there's a lot of volatility in the markets, but historically they go up much more, and more often, than they go down. By my count, since 1985 the market has:

The bottom line? All of this volatility makes trying to "time" the market a fool's errand.

Market-collapsing bubbles like the dot-com one of the late '90s and the housing financial crisis we're still emerging from are almost impossible to see coming. Sure, hindsight says we should've seen it, but almost nobody does until it's too late and the crash has started. By trying to sit out the market and wait for the next correction, investors miss out on most of the market's moves upward, convinced that the market will collapse any day, only to see it go up another 50% or more before that 30% fall eventually does happen.

You can invest in any market
Dollar-cost averaging is a great way to take a lot of the guesswork out of investing, especially for anyone who's regularly (monthly, quarterly) putting new money into a retirement or investment account. Whether you're fresh out of school and just getting started, or only 10 years from retirement, dollar-cost averaging is a simple way for individuals to build wealth by regularly investing into great assets on a fixed schedule.

How's it work?
The idea behind dollar-cost averaging is simple: Instead of trying to figure out the best price to pay for a stock or ETF, you just start with the company or fund that you've identified as your long-term investment vehicle. ETFs, especially index-based ETFs, are a great vehicle to use, especially for investors who are only able to put away a small amount of money at a time, as they offer broad exposure to multiple companies in multiple industries, providing diversification and protection from a single company carrying too much weight, potentially sinking your returns.

Take the Rydex S&P Equal Weight ETF (NYSEMKT:RSP) as an  example. This low-cost ETF tracks the S&P 500, but instead of being weighted by market cap, all 500 companies carry equal weight. Here's how this fund has performed compared to the S&P 500 index and SPDR S&P 500 ETF (NYSEMKT:SPY): 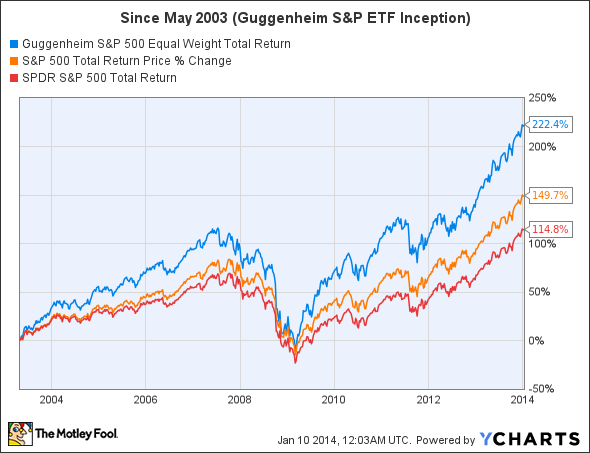 As you can see, in total returns (dividends included) RSP has performed admirably, while the SPY SPDR has underperformed its own index. But of course, much of this strong performance is a product of timing. If we stretch the SPY SPDR back to the peak of the 2000 market, returns suffer immensely: 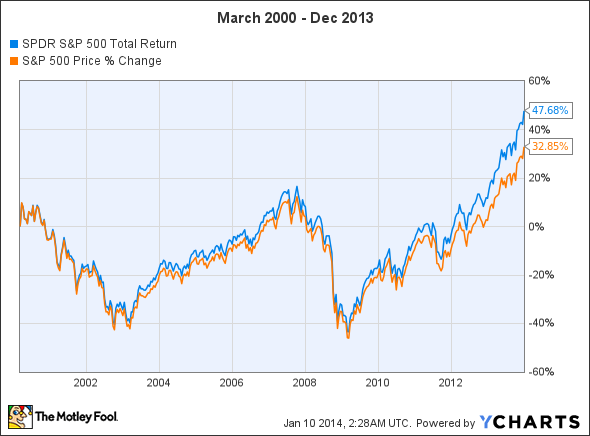 RSP wasn't launched until May 2003, so we have to rely on SPY for this exercise. As you can see, money invested nearly three and a half years earlier than the first example netted less than half as much return, all due to timing. How would it have worked out differently for an investor plugging money into SPY every week?

It's not a sprint
Building wealth takes time -- Warren Buffett has built more than 80% of his personal wealth after turning 50, largely as a product of staying invested and not trying to time the market. Using dollar-cost averaging is a tremendous hedge for investors, and lets you buy in any market condition, and letting time -- the individual investor's best friend -- and the market's inherent volatility do all the heavy lifting. If you're just getting started and don't think you're ready to buy individual stocks, index-tracking ETFs like RSP and SPY are a good place to start.

Have questions? Let me know in the comments below.