There's no denying that financial markets are becoming increasingly intertwined. The massive increase in international trade over the past few decades is responsible for this and the ripple effects that it creates.

For example, a strong economy in China means consumers there have more money to spend on $5 Frappuccinos at their local Starbucks. If Starbucks sells more coffee in China, the company will purchase more coffee beans. This, in turn, would benefit growers in Latin America and Africa. These growers would then buy harvesting machines designed in Europe and assembled in Asia.

Even if you invest in companies that don't have international customers, they may sell to clients that do and thereby expose you to a "spillover" effect. The chart below shows just how much some of the bellwethers of our economy rely on international sales. 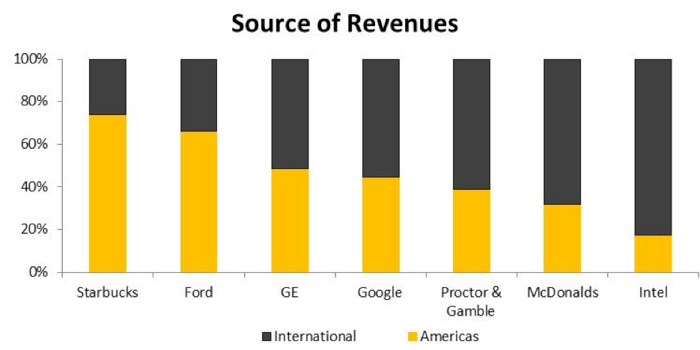 There's no hiding from the intertwining of global economies and its effect on the financial markets. Here are some long-term trends to keep an eye on, as they will undoubtedly have an impact on your portfolio.

China
Let's start with the obvious. China is already the second-largest economy in the world and is by far the fastest-growing of the major world powers. Because of the rising wealth of its massive population, China is a huge export market for Western consumer-product makers.

The breakneck speed of infrastructure development in China also makes it the world's largest importer of natural resources. This fuels the earnings of virtually every mining and energy company globally.

After two decades of hyper-speed growth, China's economy is finally decelerating. The nature of the deceleration (gradual versus volatile) and where growth finally levels out to will impact every stock market globally. A slowdown in Chinese growth will have an especially profound effect on Latin America, Africa, and Australia, where natural-resource production constitutes a major portion of their economies.

Brazil, India, and Russia
These countries represent the next tier of the fastest-growing major economies. Similar to China, they are all characterized by an expanding and increasingly prosperous middle class with an appetite for Western products.

These consumer markets will continue to expand so long as their underlying economies perform well. All three countries share the unfortunate trait of having corrupt and inefficient governments. Until recently, these weaknesses were masked as the countries rode on the coattails of China's growth.

As their economies become more mature and China decelerates, these inefficiencies will become more apparent and obstructive to growth. Investors should be mindful of whether their governments are taking the necessary steps to address these structural inefficiencies by cracking down on corruption and decreasing bureaucracy. Otherwise, a slowdown in these economies will hurt Western companies that rely on international sales.

United States
And now for the 800-pound gorilla in the room. Although the U.S. has leveled out to a much slower rate of growth than it enjoyed in the previous decade, it is still by far the largest economy in the world (double that of China) and touches every equity market on the planet.

By comparison, the U.S. has one of the least corrupt and most efficient economies, creating an environment that attracts entrepreneurs and facilitates business activity. Recently, one of the biggest threats to U.S. growth has been political deadlock.

The near-failure of Congress to raise the Federal debt ceiling last year sent markets reeling worldwide. The U.S. supplies much of the capital that finances growth in other economies. If a Brazilian mining company needs $5 billion to build a new mine, it's likely that a good portion of that will come from a U.S. investment firm. If political deadlock led to a default on U.S. debt (widely considered the safest investment in the world), many U.S. investors would enter a state of fear and pull their money out of the market.

This would wipe out the financing required to fund projects worldwide and bring the global economy to a screeching halt. Whether or not the U.S. government can reduce its acrimonious partisanship and learn to compromise will have a profound impact on markets everywhere.

What you can do
You can gauge your portfolio's exposure to these global factors by understanding how much of the sales of your portfolio companies are generated domestically versus abroad.

A company that relies 100% on domestic sales may still be indirectly affected by a slowdown in the Chinese economy, but to a much lesser extent than a company that makes half its revenue in China.

The bottom line is that you don't want your portfolio to be overloaded with companies that rely heavily on one particular region for their business. If that's the case, you're essentially making a bet on the economic growth of that region. That may not be the investment thesis you originally had in mind.