The markets rallied yesterday, and many leading financial news outlets pointed to improved consumer confidence as the main driver behind the uptick.

Most of us hear statements such as, "Consumer confidence rose in March," and generally think, "Well, that's good ... I guess." But do we really know what it means? And is it really a valuable indicator for us to use when making investment decisions?

Let's break it down into some easy to understand pieces.

How do you feel?

Every month, an independent organization called The Conference Board surveys 5,000 random households. It asks respondents to give their thoughts on each of the five following topics as either "positive," "negative," or "neutral":

You might have noticed that two questions address how things are now, while the rest refer to how the respondent thinks they'll be in the future. The overall index takes both into consideration. When a total index score is given, here's how the two are weighed. 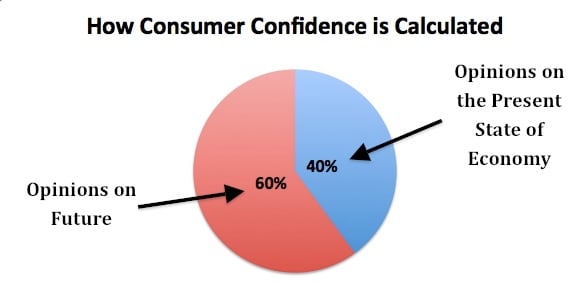 In many ways, this is similar to how earnings reports are interpreted by Wall Street. While results over the past quarter are certainly important, forecasts for the coming quarter and year usually drive the stock's price in the days and weeks following the report.

Over time, what's the value?

Getting a read on any economy can be difficult -- if not downright impossible.  There are literally billions of economic interactions and transactions taking place every day. Spread that out over 50 states and over 300 million people, along with international trade, and you get an idea of the complexity of it all.

It may seem silly to give any credence to a study that simply measures the opinions of 5,000 households, but put in the appropriate light, it can serve as one of (hopefully) many data points. Over time, consumer confidence generally moves in correlation with the stock market and overall economy. When optimism pops over 100, stock prices and the economy in general tend to peak, and then fall to more historical levels. 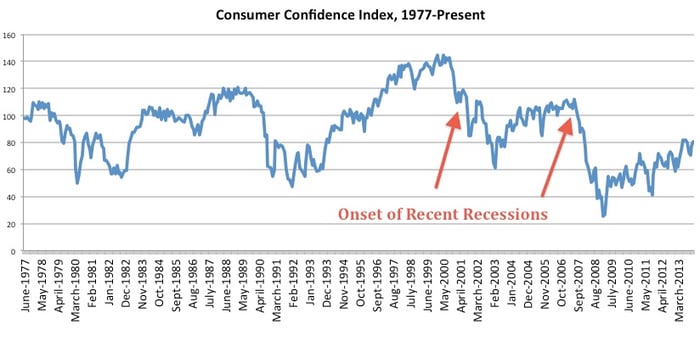 What's the takeaway?
For March, opinions about the current situation of the economy actually went down slightly, but expectations -- which make up a bigger piece of the pie -- increased much more than expected.

The two key variables contributing to the rise were opinions about future business and job market conditions. 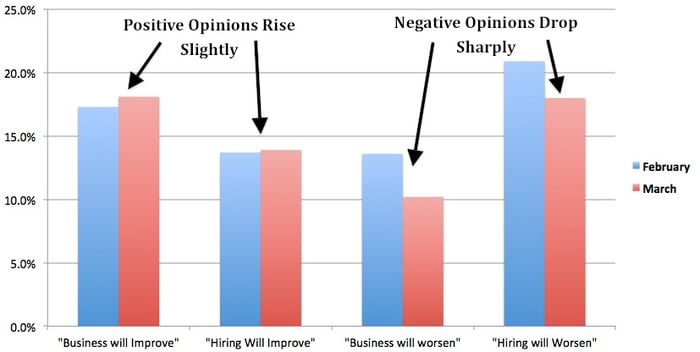 Source: The Conference Board.

As you can see, it's not so much that the respondents were overwhelmingly optimistic. Rather, they just weren't as negative as before.

It's probably a little bit of both. For long-term investors, this shouldn't make or break any decisions you make. In general, people are slowly but steadily warming up to the reality that the Great Recession is over and a brighter economic future is on the horizon.