Please ensure Javascript is enabled for purposes of website accessibility
Log In Help Join The Motley Fool
Free Article Join Over 1 Million Premium Members And Get More In-Depth Stock Guidance and Research
By Sean Williams – Updated Sep 27, 2018 at 10:33AM

The stock market is a two-way street, and stocks are just as likely to fall as rise. Find out what some investors do to take advantage of this, and what risks might be involved, including the dreaded short squeeze.

For example, as of Tuesday, June 9, 2015, there were 88.6 million shares of Ford Motor (F -2.35%) held by short-sellers. On the surface it might appear that investors were making a very bearish bet on Ford, until you realized that the company had 3.66 billion shares in float. In other words, with a short percentage of float of just 2.6%, a short squeeze there was unlikely. 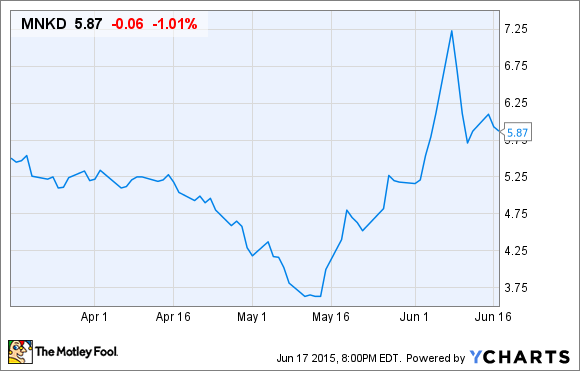 But, biopharmaceutical company MannKind (MNKD 3.34%), the developer of inhaled diabetes medication Afrezza, is a perfect example of a company that is susceptible to a short squeeze. As of June 9, 2015, 131.2 million shares of MannKind were held by short-sellers compared to a float of just 263.4 million shares. That works out a short percentage of float of 51.2%. Not surprisingly, MannKind's stock had a rapid reversal from as low as $3.46 intraday to more than $7 over the span of four weeks, likely fueled by short-sellers covering their positions.

Diagnostic test developer Myriad Genetics (MYGN -2.20%), which is best known for its BRACAnalysis test that helps women determine if they carry the mutant BRCA1 or BRCA2 gene, which comes with a higher risk for breast and ovarian cancer, had a days to cover total of a whopping 67 at the time of this writing! There were 28.7 million short-sold shares outstanding, but average daily volume on the stock was a mere 431,000 shares. If positive news were to hit the newswires, short-sellers could be unable to exit their position without hefty losses.

The Motley Fool recommends Ford. Try any of our Foolish newsletter services free for 30 days. We Fools may not all hold the same opinions, but we all believe that considering a diverse range of insights makes us better investors. The Motley Fool has a disclosure policy.