Please ensure Javascript is enabled for purposes of website accessibility
Log In Help Join The Motley Fool
Free Article Join Over 1 Million Premium Members And Get More In-Depth Stock Guidance and Research
By Jamal Carnette, CFA - May 18, 2016 at 6:38PM

Gaming and VR are positive tailwinds if AMD can execute. Advanced Micro Devices (AMD -5.20%) appears to be in the midst of a turnaround. Over the last one-year period, AMD stock has increased nearly 65% versus the PHLX Semiconductor Sector Index's (SOXX -2.90%) loss of nearly 9%. Against its biggest GPU competitor, NVIDIA (NVDA -6.36%), however, AMD stock underperformed during this period. 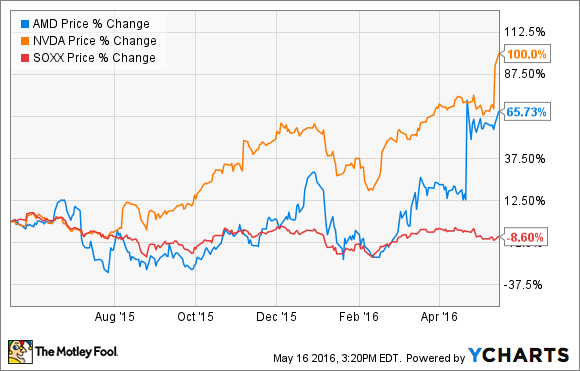 For AMD, less bad news has been good news. Although the company beat top-line analyst expectations by posting $832 million in revenue, this was 19% lower than last year's corresponding quarter. On a divisional basis, AMD's revenue decrease (first quarter 2016 compared with first quarter 2015) was broad based with a 14% decrease in computing and graphics, and a 25% decrease in the company's smaller enterprise, embedded, and semi-custom business. AMD shares surged 10% after first-quarter earnings when management guided for second-half profitability (non-GAAP).

One of the opportunities for AMD has been simply to win back market share in discrete GPUs. After years of enjoying a 60/40-split with NVIDIA taking the larger share, AMD now only claims roughly 20% of the discrete graphics card market. The company hopes its newest graphics architecture will improve the company's fortunes.

AMD is going with a different strategy
Perhaps AMD doesn't have to win back market share from NVIDIA on a significant basis in order for investors to be rewarded. The company stated it would launch its new Polaris GPU architecture in "mid-2016," with the rumors suggesting, specifically, June at Computex. Instead of attempting to compete with NVIDIA's Pascal in the high end, AMD is focusing its efforts on mainstream users. AMD's Corporate Vice President of Alliances, Content and VR, Roy Taylor discussed this with ARS Technica.

The reason Polaris is a big deal is because I believe we will be able to grow that TAM [total addressable market] significantly. I don't think NVIDIA is going to do anything to increase the TAM, because according to everything we've seen around Pascal, it's a high-end part. I don't know what the price is gonna be, but let's say it's as low as 500-600 [pounds] and as high as 800-1000 [pounds]. That price range is not going to expand the TAM for VR. We're going on the record right now to say Polaris will expand the TAM. Full stop.

Since then, NVIDIA confirmed it will introduce a lower-spec Pascal-powered GeForce GTX 1070 in June at a $379 price point. It was always a pipe dream for AMD to think NVIDIA would totally concede the low/mid-range market, but Taylor's bullishness points to a low-cost, value-driven product that will grow the VR market.

Gaming and VR may help AMD continue its run
Over the next few years, virtual reality will most likely be a huge catalyst to NVIDIA, AMD, or both. Current Facebook-owned VR company Oculus names NVIDIA's GTX 970 and AMD's R9 290 video graphics as entry-level cards for virtual-reality functionality. The industry should witness a huge upgrade cycle for gamers seeking to add VR to their gaming experience. AMD doesn't need to significantly grow market share in order to benefit from this shift.

Overall, gaming should boost AMD's fortunes for the intermediate future. CEO Lisa Su guided for 15% revenue growth in the second fiscal quarter, pointing to the company's system-on-a-chip, or SOC, business as the driver for returns. Typically, AMD's SOC business is limited to gaming consoles, with speculation that Sony's next-gen Neo version of the PlayStation will be one of the consoles. If the company can deliver on promises then it's possible for the stock to continue to power higher.