Please ensure Javascript is enabled for purposes of website accessibility
Log In Help Join The Motley Fool
Free Article Join Over 1 Million Premium Members And Get More In-Depth Stock Guidance and Research
By Ashraf Eassa - May 23, 2016 at 10:00PM

A lot better than its current CPUs have been able to. 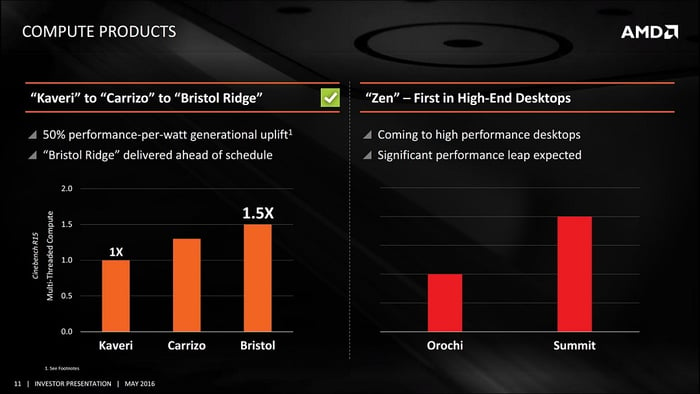 Using this slide, we can probably get some sense of how Summit Ridge will compare with Orochi. This should allow us to do a preliminary competitive comparison with Intel's (INTC -2.86%) processors.

On the right, AMD seems to indicate that Summit Ridge will offer around twice the performance of Orochi. Note that the Y-axes aren't labeled, so the assumption that the "Summit" bar is twice as long as the "Orochi" bar is just that -- an assumption.

Further, I am going to assume that AMD's comparison refers to multithreaded performance, since such a comparison would probably put the Summit Ridge part in an ideal light.

At any rate, with the assumptions in place, we can do some work.

In the Cinebench R11.5 benchmark, a performance test that can effectively utilize many cores to render a complex 3D scene, the top Orochi chip, marketed as the FX-8150, scores 6.01 points at its default speed, per a benchmark performed by website Bit-Tech.

A straight doubling of this score would put the Summit Ridge part at around 12 points in this test.

I ran this test on my Intel Core i7-6700K. The chip is at factory default speeds of 4GHz base/4.2GHz turbo, and memory is running at DDR4-2133 speeds -- it can overclock higher, but this is the highest that Intel rates the memory controller at. I got a score of 10.20.

That means that, in this performance test, a quad-core Skylake at 4GHz base/4.2GHz turbo is around 15% slower than an eight-core Summit Ridge at unknown clock speeds.

According to Bit-Tech, the six-core Haswell-based Core i7 5820K scores around 11.7 in the same test -- about what the eight core, 16-thread AMD Summit Ridge could score. The 5820K has six cores, rather than the four cores in my 6700K chip, but the cores themselves come out of the box at much lower frequencies, so per-core performance is much lower, but there are two more cores to pick up the slack.

Indeed, if we use Cinebench R11.5 as a proxy for multicore performance, then I would guess that AMD's upcoming Summit Ridge chip will be about as fast as the current six-core Intel Core i7-5820K -- a $390 part -- in multi-threaded workloads.

This would suggest that Intel's per-core performance is better, but thanks to AMD's throwing in more cores, it should be able to offer up similar multicore performance.

From a business perspective, AMD's current best high-end desktop chip sells for around $199. Assuming that Intel doesn't dramatically change its product stack between now and the launch of Summit Ridge, AMD would be in a position to charge, perhaps, $299 for the top Summit Ridge part -- a significant boost in selling price.

I don't think AMD is going to put out "Intel-killer" parts, but I do think Summit Ridge has the potential to improve AMD's competitive positioning in the enthusiast desktop market.