Please ensure Javascript is enabled for purposes of website accessibility
Log In Help Join The Motley Fool
Free Article Join Over 1 Million Premium Members And Get More In-Depth Stock Guidance and Research
By Timothy Green - May 24, 2016 at 11:00AM

The DRAM and NAND manufacturer is currently struggling, but some positive developments could push the stock higher in the coming years.

Shares of memory-chip maker Micron Technology (MU -4.52%) have lost nearly 70% of their value since peaking in late 2014. Oversupply in the DRAM and NAND markets has ravaged the company's bottom line, turning once-record profits into losses. During Micron's latest quarter, the company reported a steep 30% year over year drop in revenue and a $97 million net loss. 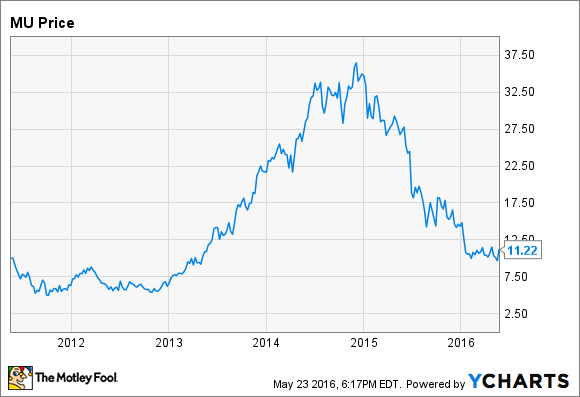 The worst for Micron may not be over, but there are a few reasons why the stock could rise over the next few years.

Trouble in the hard-drive market

While DRAM accounts for the majority of Micron's revenue, NAND is an important business for the company as well. The NAND market has been rough for Micron recently, with the company's storage segment posting a loss in each of the past five quarters.

One development that could help Micron's NAND business is the deteriorating state of the hard-drive market. Between Seagate, Western Digital (WDC -4.13%), and Toshiba, hard-drive unit shipments plunged by 20% year over year during the first quarter. A weak PC market is one driving force, but the rapidly falling price of solid-state drives is also a factor. Western Digital recently closed on its acquisition of NAND manufacturer SanDisk, with the company recognizing that hard drives are unlikely to be a growth market going forward.

Only a mid-teens percentage of Micron's NAND revenue came from solid-state drives during the company's latest quarter, with the bulk coming from memory cards and USB drives. But the SSD market is growing, with research company MarketsAndMarkets expecting total SSD sales to grow by 9.5% annually between 2016 and 2022. Unit sales should grow even faster as prices fall.

One way to put an end to an oversupply situation is for demand to increase, and rising demand for SSDs could help put Micron's storage business back into the black. That would give investors a reason to push the stock higher.

Micron and Intel (INTC -2.26%) jointly developed 3D XPoint, a new type of memory that is non-volatile like NAND but both faster and more durable. Intel is expected to release SSDs based on 3D XPoint sometime this year, and Micron will be free to launch its own products as well. The relationship between Intel and Micron is somewhat unclear, and Micron will apparently be competing directly with Intel. But if 3D XPoint memory is widely adopted, it could create an entirely new revenue stream for Micron.

3D XPoint could either replace DRAM, NAND, or both, or it could act as a middle layer of memory between them. In data center applications, having a fast middle layer could make sense, allowing databases normally stored on NAND to be sped up significantly. 3D XPoint may also work well in mobile devices, potentially acting as both random-access memory and storage.

Micron has previously stated that it doesn't expect meaningful revenue from 3D XPoint until 2017, but the company's expectations after that are sky high. CEO Mark Durcan suggested during the company's summer analyst conference that 3D XPoint could grow to be a $5 billion business by 2018, about half the size of Micron's DRAM business at the time. That outlook may be overly optimistic, but if 3D XPoint lives up to the hype, Micron's stock could soar.

DRAM accounts for the majority of Micron's revenue, making the current oversupply situation plaguing the industry a major drain on revenue and profits. The PC market has so far shown no real sign of stabilizing, and the smartphone market suffered its first year-over-year unit shipment decline during the first quarter of 2016. Micron's mobile segment was hit particularly hard during the company's latest quarter, with revenue plummeting 40% year over year.

The DRAM market may remain weak for a while, but there has been some good news recently. Micron rival SK Hynix forecasted strong DRAM shipment growth when it reported earnings in April, a possible sign that demand is picking up. Samsung, another DRAM rival, has reportedly slowed down supply growth, a move that led Bernstein to raise its price target on Micron to $11 per share and predict that supply tightness would manifest itself by the second half of 2017.

Oversupply in the DRAM market will eventually be corrected, either by rising demand or falling supply. Micron's DRAM business will recover as a result, but it's impossible to predict exactly when this will happen. It may be this year, it may be next year, or it may take even longer. With the stock down so much over the past couple of years, any good news on the DRAM front could send Micron stock higher.