Please ensure Javascript is enabled for purposes of website accessibility
Log In Help Join The Motley Fool
Free Article Join Over 1 Million Premium Members And Get More In-Depth Stock Guidance and Research
By Jeremy Bowman - May 24, 2016 at 12:38PM

There are a few different groups you might consider to be the sneaker giant's best clientele.

Nike (NKE -1.00%) has ruled over the sports apparel universe for the past generation. The Nike swoosh has become one of the most recognized logos around the world, rising to the top alongside Michael Jordan, the athlete and icon most associated with the sneaker-maker. Today, the company is a juggernaut worth nearly $100 billion, and it continues to put up strong growth numbers.

So with billions of dollars in annual revenue, who is Nike's favorite customer? That depends how you look at the question.

It's all about the kicks

The most obvious answer would be the sneakerhead. This a collector of rare, classic, limited-edition and other sneakers, who treats shoes much in a way that others treat wine or art. You might see these people sitting outside your local Modell's or Foot Locker (FL -0.47%) in lawn chairs overnight waiting to get their hands on the latest pair of limited-release Air Jordans. Often, these folks are just looking to resell a few pairs online, because the secondary shoe market -- like the secondary wine or art market -- is big business, and Nike intentionally fuels it through artificial scarcity.

Resale value for such shoes is often in the thousands of the dollars. These sneakers generally retail for between $150 and $275, meaning Nike's profit might be much slimmer than that of the resellers, though still sizable. But it's a symbiotic relationship for both parties. Scarcity fuels outsized demand for these sneakers and imbues them with a sense of coolness and desirability that might not exist if Nike made more of them or raised its prices. The result is a relationship between a brand and customers that is unique in the footwear world and special within fashion. The sneakerheads drive high-margin sales for Nike and more importantly, maintain the appeal of its brand, especially the Air Jordan, which essentially ignited the sneakerhead phenomenon.

While sneakerheads may be Nike's most loyal customer segment, the one it has been targeting the most in recent years seems to be women. With the popularity of "athleisure" wear and the emergence of brands like Lululemon Athletica, bigger companies have come to recognize the potential of the women's market.

Sales of women's gear rose 15% last year, or 20% in constant currency, as Nike continues to invest in the fairer sex. It's begun launching women-only stores, opening the first in late 2014 outside of Los Angeles, and the women's segment is a big part of Nike's goal to grow revenue to $50 billion by fiscal 2020. The swoosh sees revenue in the women's category nearly doubling in that time period, from $5.7 billion to $11 billion. With the women's market only making up 20% of revenue currently, the opportunity for improvement seems considerable.

Though Nike has some of its own retail stores and a growing e-commerce operation, the company primarily depends on retail partners to reach customers. Of these, Foot Locker is by far the most important. The relationship between the two has been mutually beneficial, with each company's stock significantly outperforming the broad market in recent years. 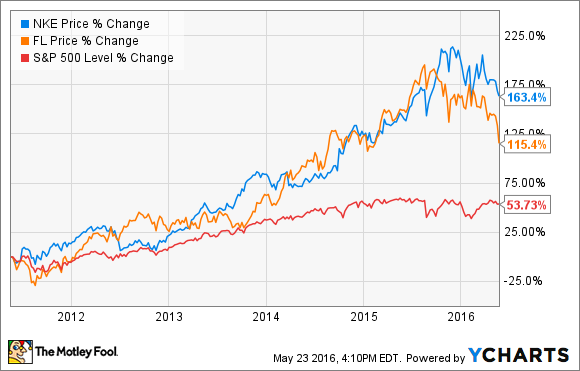 Roughly two out of three pairs of sneakers that Foot Locker sells are from Nike, and the swoosh counts on Foot Locker for about 20% of its sales. Nike often gives Foot Locker early releases, exclusives, and other perks in exchange for preferred placement, as its relationship gives it access to Foot Locker's 3,500 stores nationwide, an unmatched network that makes it the #1 sneaker seller in the country.

Together, the two have helped make basketball one of the fastest-growing categories in sneaker retail, a space that Nike owns with near-90% market share. Though sales have slowed at Foot Locker recently, it has been one of the best-performing retailers in an industry that's otherwise struggling with shifting consumer patterns, as Nike has been one of the few brands able to consistently drive demand.

Keeping old customers and bringing in new ones will be key for the Jordan-maker as it works to hit its goal of $50 billion in revenue by 2020. By focusing on sneakerheads, women, and its special relationship with Foot Locker, Nike should be able to get there.