Please ensure Javascript is enabled for purposes of website accessibility
Log In Help Join The Motley Fool
Free Article Join Over 1 Million Premium Members And Get More In-Depth Stock Guidance and Research
By Travis Hoium - May 26, 2016 at 8:13AM

Residential solar's massive growth days appear to be over, but commercial solar could be an even bigger opportunity.

As the market for residential solar in the U.S. starts to slow, installers are looking for ways to expand their markets into commercial solar, which has a number of similarities. Most commercial installations are on rooftops, just like residential solar, and as a result, some of the same companies are winning in both markets.

But commercial solar also has some structural differences that make it both difficult and a big, largely untapped opportunity in the U.S.

Commercial solar is fragmented in the U.S.

It may seem like commercial solar would be an easy market to enter in the U.S., but it's proven very difficult for some big solar companies. SolarCity (SCTY.DL) has struggled to hit its own growth targets and project timelines, and has only 14% of the market. That's followed by 7% for SunPower (SPWR -3.36%), but the top 10 installers still had just 42% market share in 2015. 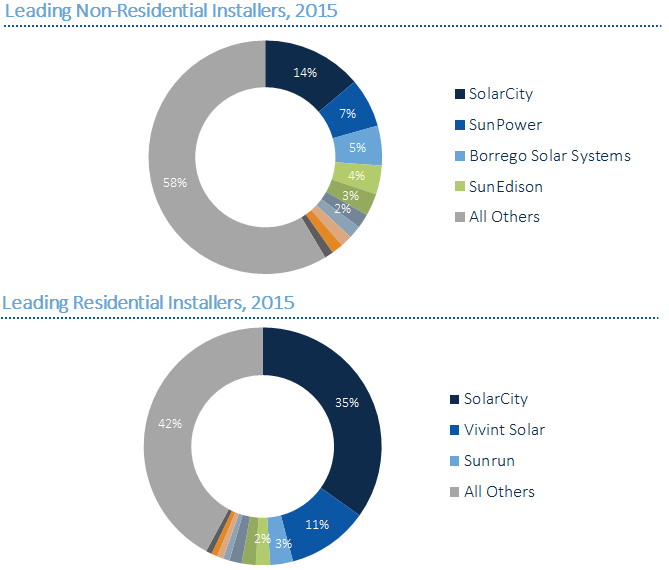 The reason for this fragmentation has a lot to do with how the commercial market is structured, but that structure also creates arguably a bigger opportunity for developers than they have in residential solar.

The first thing to understand is that selling solar to commercial customers is very different than selling to residential customers. It may seem counterintuitive, but commercial customers generally have worse credit ratings than a homeowner, so getting a loan or getting investors to fund leases is actually harder.

But it also presents some interesting opportunities for companies who can offer a full suite of solutions. Commercial buildings pay lower electricity rates than retail, but they often pay demand charges based on peak energy demand in a month, even if that demand only exists for a few minutes. This can make energy storage an economical option for commercial customers. And they may take more interest in the monitoring and control options some solar companies are building into their systems to control costs further.

Why big names will win big in commercial solar

If you look at the products SolarCity and SunPower have introduced in the last few years, two of the most important are ZS Peak and Helix, respectively. These are standardized installations on commercial rooftops and other structures that help lower the cost for installers. In theory, the same number of installers as it takes to put up a 5 kW or 8 kW solar system on a residential roof can put up 13 times that  or more. It's very difficult for small installers to create such standardization or efficiency, so the big players should win big. And that's just the beginning.

What may drive further adoption and value creation is the fact that energy storage and sophisticated energy management make a lot of sense for commercial customers. SolarCity is working with Tesla Motors' (TSLA -8.01%) Powerpack to provide backup storage and its monitoring system called DemandLogic to create multiple layers of value in commercial energy. SunPower has a similar partnership for energy storage with Stem and EnergyLink software that provides energy monitoring and management to its customers.

This suite of offerings isn't generally valuable for residential consumers because they can't monetize them in the same way commercial customers can. They're also a differentiator, which should help companies like SolarCity and SunPower take a disproportionate share in the commercial market in the future.

Commercial solar could be more than just rooftops

An extension of the solar systems on big box rooftops or industrial buildings that is generally associated with commercial solar, is a burgeoning market in off-site commercial solar. First Solar (FSLR -2.77%) is building a plant for Apple  and indirectly for Switch in Nevada, SunPower has built multiple on- and off-site systems for Apple around the world. More and more, companies are looking for a way to directly buy renewable energy even if they can't get it on their roof.

That creates a commercial market that even utility-focused companies like First Solar can play in. They're signing agreements directly with commercial offtakers or sometimes with the utility as an intermediary, expanding commercial demand for solar energy. First Solar, in particular, has shown plans to add energy storage and smarter controls to these kinds of installations.

Commercial solar could be big business in 2016

As companies find it harder to sell residential solar systems, many commercial customers are seeking out solar energy to make their operations greener. A fragmented market and multiple value creation opportunities lend themselves to larger, more integrated installers. That, in turn, should create a major tailwind for companies like SolarCity, SunPower, and First Solar in 2016 and beyond.