Please ensure Javascript is enabled for purposes of website accessibility
Log In Help Join The Motley Fool
Free Article Join Over 1 Million Premium Members And Get More In-Depth Stock Guidance and Research
By Demitri Kalogeropoulos - May 26, 2016 at 6:48PM

Why these stocks jumped as the broader market ran in place on Thursday. 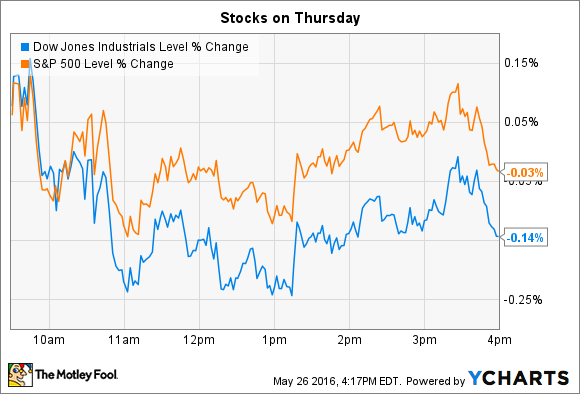 Two new reports suggested that economic growth could be gaining momentum -- which adds to the case for a likely interest rate boost by the Federal Reserve next month. Durable goods orders rose by 3.3%, the government announced, compared to the 1% uptick that economists had forecast. Pending home sales for the month of April also trounced expectations by spiking 5% to reach their strongest pace since February 2006.

As for individual stocks, Costco Wholesale (COST 1.63%) and Dollar Tree (DLTR -0.26%) were two of the biggest movers as investors cheered the retailers' latest quarterly results.

Costco shares jumped 4% after it announced steady sales and profit growth for its fiscal third quarter. Revenue ticked higher thanks entirely to a growing warehouse base. Comparable-store sales rose by 3% after accounting for foreign currency swings and gas price deflation. While that's far from the 6% pace that shareholders saw through most of fiscal 2015, Costco's comps still indicate solid customer traffic gains and continued market share improvement. The comparable figure for both Wal-Mart and Target, for example, was 1%.

Costco's membership fees, its real engine of profitability, rose 6% to $620 million. That success, plus slow expense growth helped earnings improve to $545 million, translating into a net profit margin of 2.1% compared to 2% a year ago.

While the results indicate a slower traffic growth pace, Costco has a few initiatives in the works that should drive profits higher over time. It's in the middle of its biggest store footprint expansion yet, with plans to open 30 warehouses this year compared to 23 in fiscal 2015.

It has also been more than four years since Costco raised its annual membership fee, which suggests another increase could be coming as soon as next year.

Discount retailer Dollar Tree led all S&P 500 stocks higher with its 13% jump today. The catalyst for that pop was a first-quarter earnings result that provided much of the good news that investors were hoping to see.

Sales growth came in right at management's guidance as comps improved by 3%. Executives noted that the higher comps figure was powered by a mix of improving customer traffic and greater spending per transaction. At the same time, cost cuts helped offset the addition of Family Dollar's low-margin sales into the base and adjusted earnings spiked 25%.

"Through what continues to be a challenging economic environment," CEO Bob Sasser said in a press release, "we delivered sales of $5.09 billion, which was the mid-point of our guidance range, and earnings that exceeded the high end of our guidance range." Dollar Tree's challenge ahead also involves a complex Family Dollar integration that requires the combination of 13,000 stores and 23 distribution centers.

A merger of that size can often spark unwelcome financial surprises, but that doesn't appear to be the case here. In fact, Dollar Tree just raised its full-year profit outlook to $3.69 per share from the $3.50 per share it projected in March.