Please ensure Javascript is enabled for purposes of website accessibility
Log In Help Join The Motley Fool
Free Article Join Over 1 Million Premium Members And Get More In-Depth Stock Guidance and Research
By Todd Campbell - May 26, 2016 at 3:20PM

Billions of dollars in revenue could be on the horizon if the company can execute on its plans to expand gene sequencing in cancer diagnosis and treatment.

Shares in gene-sequencing giant Illumina, Inc. (NASDAQ: ILMN) have retreated since the company's disappointing first-quarter earnings results, but investors might want to look beyond that report and consider some opportunities for growth that lie ahead for the company. For instance, the market opportunity associated with personalized cancer therapies could be worth $12 billion.

Illumina is the largest maker of gene-sequencing machines, and it was the first company to develop a system that lowered the cost of sequencing a gene below $1,000.

The company markets a slate of gene-sequencing systems that range in cost from $50,000 to $10 million, and globally, more than 6,700 of its sequencing machines are in use.

Because Illumina pioneered the industry and its systems are so widely adopted, it generates nearly 60% of its $2 billion plus in annual revenue from high-margin consumables used in gene sequencing.

The company's revenue has grown by a compound annual rate of 20% since 2010; however, sales growth slipped into the mid-single digits in the first quarter, and that caused a 25% drop in its shares this year. 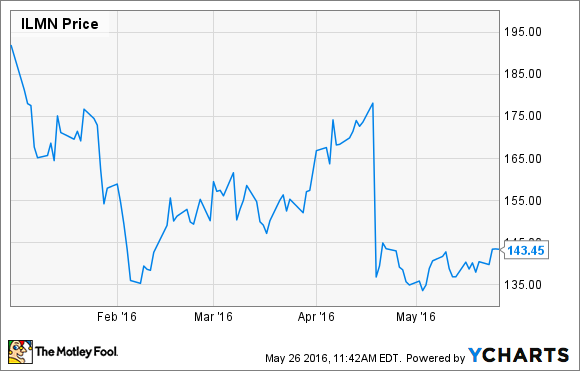 Although the company's 6% year-over-year growth in the first quarter is disappointing, the slowdown could be temporary. That's because slowing sales are being blamed on the timing of orders and operational missteps in Europe, both of which are being addressed. Since growth in Asia and the Americas is still clocking in at a double-digit rate, fixing Europe could put the company back on track soon. As a result, management still expects full-year sales to climb by 12% this year.

The company's potential to expand in oncology is one reason why management doesn't appear to be too worried about its future growth prospects.

Increasingly, gene-sequencing technology is being used by cancer researchers to develop new medicines and transform patient treatment. Using this technology, researchers can determine specific mutations in genes that promote cancer, and doctors can determine which drugs are most likely to work in cancer patients.

For example, gene research has led to the discovery of mutations to the BRCA gene, a gene that suppresses cancer tumor growth; because BRCA mutations have been shown to increase the risk of breast cancer and ovarian cancer in patients, women are proactively testing for them. It's also leading to medicines that specifically target these mutations.

Gene sequencing has also led to advances in other cancer indications. Celgene's widely used multiple myeloma drug Revlimid has been proven to be highly successful in myelodysplastic syndrome patients who are missing chromosome 5, and epidermal growth factor receptor (EGFR) testing is used to help identify lung cancer patients who might respond well to a certain class of drugs called tyrosine kinase inhibitors.

Illumina's plans to tap a meaningful share of the clinical market for gene-based cancer therapy are collaborative.

Illumina is developing panels and instruments that are more useful to cancer researchers, and it's partnering with pharmaceutical companies to develop companion diagnostics for cancer medicines. For example, Amgen Inc. has teamed up with Illumina to use Illumina's TruSight Tumor 15 kit to develop new cancer drugs. TruSight Tumor 15 uses next-generation sequencing technology to assess 15 genes commonly mutated in solid tumors.

If Illumina can successfully expand beyond research into the in-vitro diagnostic market, and establish itself as a maker of tools that allow doctors to prescribe the ideal drug for each individual's specific cancer, it could help usher in a new era of cancer care.

If Illumina's products become a standard of care in oncology, then the market potential for the company could be massive.

Worldwide, 12.7 million new cases of cancer are diagnosed every year, including 1.7 million cases in the United States. Because cancer is so common, over $100 billion is spent on cancer medicine annually.

Given the sheer size of this market, Illumina thinks that the market potential for gene sequencing in oncology could be as high as $12 billion, or roughly six times the company's current annualized sales. If it can win even a small slice of that market, that would be needle-moving for the company and its investors.

Illumina's potential in cancer isn't limited to companion diagnostics, either. Earlier this year, management disclosed a new start-up named Grail that plans to use deep sequencing to diagnose cancer in earlier stages than ever before.

Using deep-sequencing technology to identify circulating tumor DNA originating in cancer cells, Grail may be able to help millions of people discover their cancers sooner, when they're most easily treated.

The market for early cancer diagnosis could be even bigger than the market for Illumina's other oncology programs. The market for Grail in detecting cancers of stage 2 and higher in high-risk patients could be $20 billion, according to Illumina.

Add that $20 billion opportunity to the $12 billion opportunity in clinical oncology, and you can see why it may make sense to stick with Illumina in long-term portfolios. These markets won't generate massive sales for the company overnight, but they could make Illumina into a much larger company over the next 10 years. If so, then picking up shares after this recent sell-off might be savvy.