Please ensure Javascript is enabled for purposes of website accessibility
Log In Help Join The Motley Fool
Free Article Join Over 1 Million Premium Members And Get More In-Depth Stock Guidance and Research
By Sam Mattera - May 26, 2016 at 2:22PM

Millennium Management and Citadel trimmed their stakes in the cybersecurity firm last quarter.

Major hedge funds sold off shares of cybersecurity firm FireEye (MNDT 0.64%) during the first quarter. Funds run by billionaires Israel Englander (Millennium Management) and Ken Griffin (Citadel) sold nearly 1.4 million shares from the beginning of January through the end of March. While it's never prudent to blindly follow the investing activity of billionaire hedge fund managers, it's always interesting to keep track of their positions.

FireEye has been a notable underperformer in recent months. Year-to-date, shares have lost almost one-quarter of their value, and over the last 12 months, FireEye shares have fallen more than 65%. That disappointing performance may have prompted Millennium and Citadel to sell -- so should other investors follow their lead? 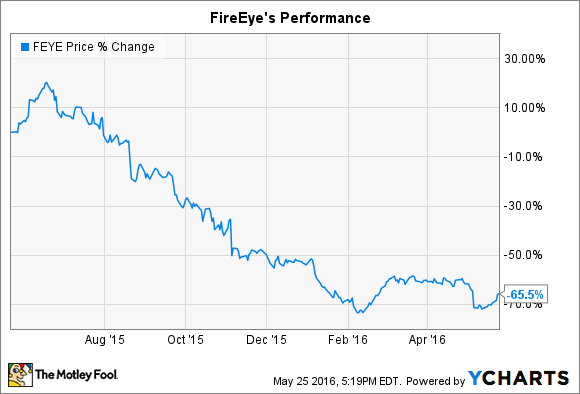 Growing but not fast enough

FireEye isn't profitable, and management doesn't expect it to be anytime in the near future. Worse, the company is hemorrhaging cash -- it posted operating cash outflow of $22.5 million last quarter, up from the $3.2 million it lost in the same period the year before. But that's mostly been true throughout FireEye's history as a publicly traded company. Investors have been willing to tolerate these losses as its business has grown rapidly.

But now growth itself has slowed in recent quarters, causing the company to consistently miss analyst estimates. Last quarter, FireEye generated $168 million of revenue, but analysts had been looking for around $172 million. At the same time, its outlook has been soft. FireEye expects its 2016 revenue to come in between $780 million and $810 million. That's well short of the $829 million analysts had been anticipating.

The company has long been seen as a potential takeover target, as its focus on advanced persistent threat (APT) detection -- an emerging area of cybersecurity -- could endear its business to larger companies operating in the space. Dave DeWalt, FireEye's CEO, has an established track record of success operating in the tech space, but his career is particularly notable in the sense that the companies he has run (most notably McAfee) have ultimately been acquired. The same may be true for FireEye, but if so, it won't be under DeWalt's stewardship. He'll remain on as chairman but will resign his CEO position next month.

FireEye has never been this cheap

Still, there's obviously demand for FireEye's products and services. Although it isn't likely to generate as much revenue this year as some may have hoped, if it hits its guidance, it will see its revenue rise at least 25% on an annual basis and perhaps as much as 30%.

The aggressive selling has sent FireEye shares tumbling near all-time lows, but on a valuation basis, the stock has never been this cheap. Because FireEye isn't profitable, it's hard to value the company under traditional metrics such as its price-to-earnings ratio. Instead, other valuation metrics must be used. FireEye's trailing price-to-sales ratio (a measure that compares FireEye's market cap to the revenue it has generated over the last 12 months) currently hovers near 3.6, a level not seen since the company went public. Palo Alto Networks competes with FireEye in the cybersecurity space -- it offers WildFire as an alternative to FireEye's APT services. It too has seen its valuation tumble in recent quarters but remains far more expensive than FireEye. 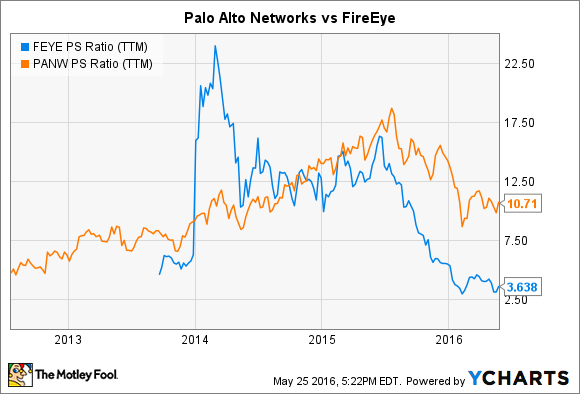 FireEye's business remains speculative. The company expects to post positive operating cash flow for all of 2016, but net income will remain nonexistent. It's slowing growth should certainly give investors pause, but from a valuation standpoint, there's never been a better time to buy FireEye shares.