Please ensure Javascript is enabled for purposes of website accessibility
Log In Help Join The Motley Fool
Free Article Join Over 1 Million Premium Members And Get More In-Depth Stock Guidance and Research
By Reuben Gregg Brewer - May 27, 2016 at 12:33PM

Teck is still working on a bold bet in the Canadian oil-sands space, but just how big a deal is it?

Teck Resources Limited (TECK -2.58%) has been investing a lot of time and money into an oil-sands project. It's more than halfway complete, and when it's finished, this miner will look different than it does today. Here's a little more detail on what's going on at the Fort Hills project in Alberta, Canada.

The first thing you need to know about Teck is that it's a miner. Its main products are metallurgical coal (about 30% of revenue), copper (35%), and zinc (35%). Like all miners, it's been hit pretty hard by the commodity downturn. That's led to cost cuts and production changes. What hasn't stopped is the spending on a big growth project... in oil.

However, this isn't the type of oil that gets drilled. The project is a Canadian oil-sands joint venture with Suncor Energy (SU 1.43%) (roughly 50% owner), Total (TTE 0.36%) (roughly 30%), and Teck (20%). Oil sands are mined using heat and chemicals to extract oil from, for lack of a better term, oil-saturated earth. This is really right up Teck's alley. And because Suncor is a major player in the oil-sands space, with oil sands making up 90% of the company's reserves, Teck is partnered with the right company here.

The big question mark recently has been about Teck's ability to fund the dig. However, with the project roughly 55% complete, Teck has just about $1 billion left to contribute. And, more important, it has roughly $1.3 billion in cash on hand and around $3 billion available on a credit facility. So paying for Fort Hills doesn't look like it will be a problem.

Since Fort Hills is looking less and less like a liability, what's the other side of the coin here? The simple answer: diversification and longevity. For example, adding oil to the operation will take Teck from three main products to four. And while that may not look like such a great deal when coal, copper, zinc, and oil are all in the dumps, it will provide more balance at some point.

"Some point" should be 2018. The mine is expected to start operating in late 2017 with a ramp-up to 90% of production capacity within 12 months. Teck's share of production is about 13 million barrels of bitumen oil per year.

Putting some dollars and cents on that, the miner generated around $400 million in cash flow in the first quarter. It expects Fort Hills to generate around $200 million in cash flow a year, assuming $60 WTI oil prices and an exchange rate of US$1.20 per Canadian dollar. Although $60 may seem like a rosy projection today, remember that this project won't be complete for another year or two, by which point supply and demand are likely to have finally reached a better balance. 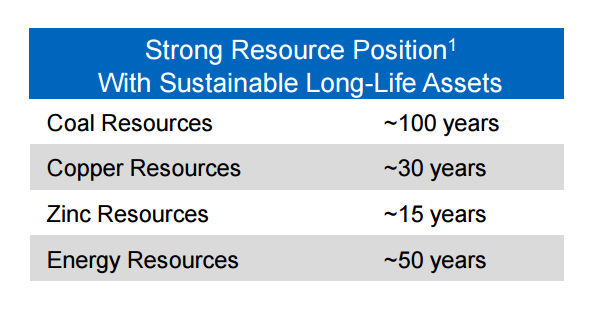 So, using back-of-the-envelope calculations, oil could generate about 10% of the company's cash flow on an annual basis. If oil prices move higher, however, there would be more cash floating around. At first glance, 10% may not sound like a huge deal, but there are two things to keep in mind. First, this is Teck's initial foray into the space. If it goes well, there could be more oil investment in the company's future. And, perhaps more important, the expected life of the Fort Hills project is 50 years. That's second only to coal's longevity in the company's portfolio.

Translation: This is a very long-term venture that should easily transcend short-term oil price fluctuations, and augment revenue, earnings, and cash flow for years to come. Now, that's something to look forward to in 2018.

When oil began to fall in mid-2014, Teck's oil investment suddenly started to look like a big risk. However, with oil starting to stabilize, and funding looking a lot more certain, the Fort Hills investment has taken on a different light. It won't be the biggest piece of the Teck puzzle, but it will provide meaningful diversification, a potential foothold for subsequent investment, and a long reserve life to support the company's future. If you've been watching Teck lately, this onetime dark cloud is beginning to look like it has a bright silver lining.