Please ensure Javascript is enabled for purposes of website accessibility
Log In Help Join The Motley Fool
Free Article Join Over 1 Million Premium Members And Get More In-Depth Stock Guidance and Research
By Daniel B. Kline - May 27, 2016 at 11:10AM

Barack Obama, or at least the threat of him, may be the greatest salesman the firearms industry has ever had.

Say what you want about President Barack Obama, but you can't deny that his presidency has been great for the gun business.

When Obama took office in January 2009, there was panic among the gun-owning and -buying community that the new president would move quickly to change existing gun laws. Depending on who you asked, those fears ranged from restricting the types of guns Americans could own to striking down the Second Amendment and sending troops into people's home to confiscate their guns.

Why are gun sales up?

Obama's mere presence in the White House pushed demand for guns even when it became clear that he lacked the political capital necessary to reform gun laws even if he wanted to. The end of his term, however, eliminates any possibility that he will somehow buck a Republican-controlled Congress and pass anti-gun legislation.

If Hillary Clinton follows Obama, even though she will almost certainly face the same Republican-dominated legislature, her being a liberal Democrat suggests that the status quo would remain, and the gun industry would still have the looming threat of new laws to drive sales. However, if Donald Trump, the presumptive Republican nominee, wins the White House, then that threat will evaporate, as the candidate has been very clear on his stance on guns:

The Second Amendment to our Constitution is clear. The right of the people to keep and bear Arms shall not be infringed upon. Period.

The Second Amendment guarantees a fundamental right that belongs to all law-abiding Americans. The Constitution doesn't create that right -- it ensures that the government can't take it away. Our Founding Fathers knew, and our Supreme Court has upheld, that the Second Amendment's purpose is to guarantee our right to defend ourselves and our families. This is about self-defense, plain and simple.

Trump has a multi-point plan stating that he is against banning any type of gun or limiting how big a magazine someone can use. He also wants to expand "right-to-carry" laws so that concealed-carry permits issued in one state apply to all 50. It's a pro-gun plan, and the candidate has already been endorsed by the National Rifle Association (NRA), so it's fair to say that President Trump wouldn't be taking anyone's guns away.

That removes a threat that has pushed the industry forward, and it could cause gun sales to collapse. 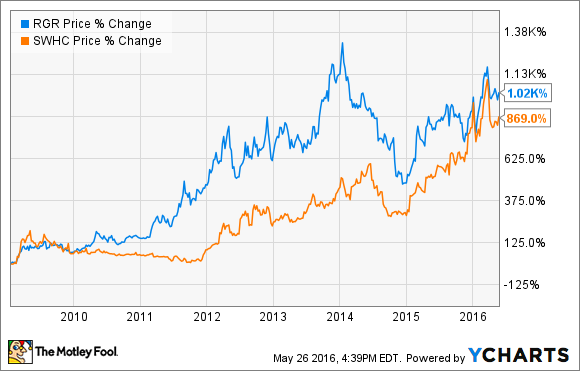 Why might Trump be bad for the gun industry?

"It sounds perverse, but gun manufacturers should be hoping for a Clinton victory," Robert R. Johnson, president and CEO of The American College of Financial Services, told The Motley Fool. "They will benefit from speculation that a Clinton administration would seek to enact gun control legislation. This will lead to people buying more guns and ammunition in anticipation of tougher gun legislation."

Johnson explained that while Trump may be pro-gun, that could actually be bad for the industry.

"A Trump presidency would mean less urgency in purchasing guns and ammo," he wrote. "Fear of change in gun control laws and the potential ramifications of changes will drive more revenue for gun manufacturers."

But for some in the gun industry, the prospect of a short-term slowdown in sales is not enough to outweigh the long-term threats posed by a president who favors gun control reform.

Joshua Waldron is CEO of SilencerCo, the largest manufacturer of suppressors for firearms. "Our next president will be responsible for appointing at least one, if not several, justices to the Supreme Court, which will have crucial influence over our judicial landscape, and could enact changes that reverberate for decades," Waldron told the Fool. "If an anti-gun shift occurs, landmark cases such as the Heller case might be overruled, and the road to abolishing our Second Amendment would be paved without much resistance."

Waldron, a member of the NRA Legislative Policy Committee, said that possibility was "most plausible" with Hillary Clinton in the White House.

"While Trump may seem like a loose cannon, and on many issues I believe he is, he is the friendliest candidate to our firearm community," he said.

It would be a short-term hit

Should Trump win, his pro-gun stance would likely hurt gun companies, who would see their impressive growth slow down, but ultimately Johnson expects it would be a short-term hit.

"I don't see a long-term drop in gun sales, just less urgency," he wrote. "Some of Trump's positions and statements may lead to more gun purchases as people feel less secure."

For Ruger and Smith & Wesson, a Trump victory would eliminate their greatest sales motivator while also protecting their businesses for a long time. Of course, Obama has not actually been able to pass any anti-gun legislation due to Republican control of Congress. But reality is not what's driving gun sales. It's the Democratic bogeyman that the gun industry has to thank.