Please ensure Javascript is enabled for purposes of website accessibility
Log In Help Join The Motley Fool
Free Article Join Over 1 Million Premium Members And Get More In-Depth Stock Guidance and Research
By Travis Hoium - May 28, 2016 at 8:12AM

Energy storage could be a big player in our energy future, and these technologies could be key to its adoption.

Elon Musk's Powerpack battery has gotten a lot of press, but there are other technologies that could serve the grid better in energy storage. Image by the author.

Renewable energy is now one of the lowest-cost sources of electric energy in the world, winning billions of dollars in open bids to provide energy to the grid. But as the renewable sector grows, utilities have to deal with the intermittent nature of its energy production, both on a minute-by-minute basis as well as through seasonal changes. And energy storage will likely play a key role in that adaptation.

Batteries have gotten a lot of the public's attention, especially after Tesla Motors' (TSLA -1.76%) Elon Musk introduced the Powerpack and Powerwall last year. But there are a few other technologies that could play a key role in balancing the grid in the future. 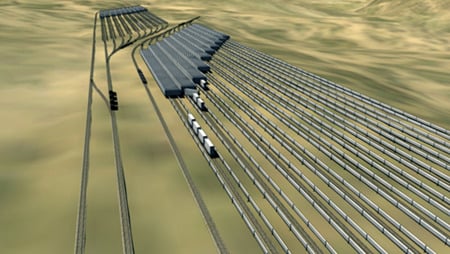 I've been workin' on the railroad

One of the simplest concepts that has been proposed is a rail energy storage system from Advanced Rail Energy Storage (ARES). The system will consume electric energy to move a series of rail cars up a hill to store energy and then generate electricity when it's needed by allowing the cars to go downhill. There are no emissions used, degradation of the facility is low, and the amount of storage available is only limited by land and elevation change.

This is similar to pumped-storage hydroelectricity, which involves pumping water to a higher elevation and then releasing it to turn a power-generating turbine when energy is needed. But pumped hydro has a larger environmental impact and can only be built in areas where hydroelectric dams are possible. In contrast, the locations available for rail energy storage are far more abundant, with less environmental impact.

The first rail energy storage plant was just approved in Nevada and is expected to be up an running by spring 2017. So keep an eye on this technology as a viable energy storage solution.

There have been dreams in the engineering community for decades about the hydrogen economy. Hydrogen can be made from a relatively simple process of electrolyzing water; when the process is reversed to create usable energy, the byproduct is just water. So it's a very clean and highly abundant source of energy.

Today, hydrogen is still in the early phases of development for energy storage but it's making progress. ITM Power has built electrolyzers in the U.K. that are being used to both fuel hydrogen vehicles and send energy to the gas system in what's called power to gas. Hydrogen is common in natural gas, so the clean fuel is being added to provide cleaner energy to existing customers. But it could also be stored for later use in storage tanks.

Hydrogen could also be getting help from the transportation sector. ITM will be rolling out five hydrogen stations across the U.S. this year in collaboration with Toyota (TM -0.96%), Hyundai (HYMLF), Honda (HMC -1.27%), and Symbio FCell. The automakers have all launched hydrogen-powered vehicles, and the electrolyzer and refueling stations will create the needed infrastructure to keep those vehicles on the road. California is also building an infrastructure of hydrogen refueling stations, although it's not clear that they'll be getting energy from clean sources (most hydrogen comes from natural gas).

The dual use of hydrogen for both grid energy storage and automotive purposes should help drive necessary R&D as well as deployment. That's supported by the fact Toyota, Hyundai, and Honda have bet on hydrogen beating out batteries as next-generation auto technology.

There are also flexibility advantages for hydrogen. Batteries are good for energy storage on minute or hour timescale, while rail is good for a slightly longer timescale. Hydrogen could be stored for months, moving clean energy created in the summer to winter months, when renewable energy is less abundant. The infrastructure isn't yet abundantly available, but with the help of the transportation sector, this is a technology investors should keep an eye on.

Companies like General Electric (GE -0.03%) have been working on flow batteries for years and even adapted the technology for electric vehicles. Lockheed Martin (LMT 2.64%) has also said it has flow battery technology that will be valuable for energy storage. Both companies are hoping flow batteries will be less costly and allow for longer-duration energy storage than a standard battery.

There will be many energy storage solutions

Like most of the electric grid, there's not one answer to energy storage. Multiple technologies will prove to be useful in different locations, and the duration of energy storage needed may drive investment. But these three technologies are worth keeping an eye on along with the batteries that get so much attention today. Energy storage is a huge potential market for investors, so knowing what's coming down the road will be key to staying ahead of the game.