Please ensure Javascript is enabled for purposes of website accessibility
Log In Help Join The Motley Fool
Free Article Join Over 1 Million Premium Members And Get More In-Depth Stock Guidance and Research
By Demitri Kalogeropoulos - May 28, 2016 at 7:32AM

These investments have the potential to generate capital gains and dividend growth for decades to come.

IRAs are great investment vehicles for two reasons: They shield returns from taxes and they promote a long-term focus by making it costly to dip into them to withdraw funds.

Those benefits also tend to point investors toward certain types of stocks. Big dividend payers, for example, are a good fit for an IRA since the income they produce isn't taxable at the time -- or at any time if you're investing in a Roth IRA.

So an ideal candidate should have a market position that can keep revenue ticking higher for decades. The company must also produce market-leading profits, which it uses to fund a steadily increasing dividend. Three stocks that meet those criteria right now are Home Depot (HD 1.75%), Procter & Gamble (PG 1.61%), and Nike (NKE -1.00%).

If you're after raw dividend power, then consumer goods giant Procter & Gamble is your best bet. In fact, at over 3%, P&G boasts one of the highest yields on the Dow (compared to Home Depot's 2% and Nike's 1%).

Investors don't have to worry about that dividend declining any time soon, either. It has ticked up in each of the last 60 years, providing a testament to the consistency of a business that's anchored on staples like detergent, paper towels, and diapers.

Demand pressures have recently driven P&G's dividend to its slowest growth pace in memory, but its rock-solid profitability and record cash flow efficiency suggest it can still produce healthy overall returns over the next decade.

Home Depot's business is more exposed to demand slumps than P&G's. Housing improvement projects aren't as non-negotiable as, say, toilet paper. That helps explain why the retailer had to suspend its dividend increases for three years during the worst of the housing market crisis.

Since then, though, the dividend has been on a tear, nearly tripling over the last three years alone. Shareholders can thank Home Depot's leadership position in the industry for that success. That's true in terms of sales growth, but the company's profitability and return on invested capital also trounce its main rival, Lowe's (LOW 1.54%) 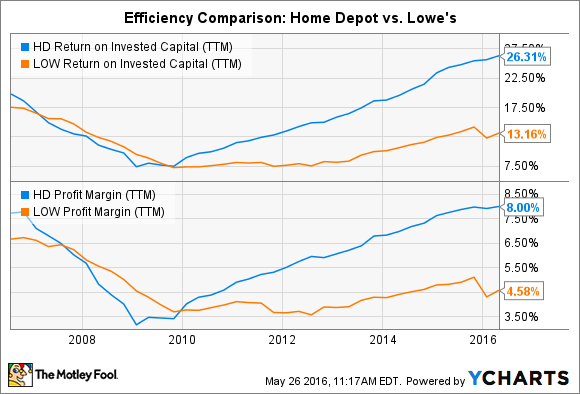 The home improvement market is bound to see its ups and downs over the years, but Home Depot's consistent ability to outperform competitors suggests that it's likely to capture more than its fair share of the long-term gains. The fact that its management team targets returning 50% of profits to shareholders as dividends (compared to 35% for Lowe's) should help investors supercharge their total returns through reinvesting those quarterly payouts.

Nike represents a good mix of established market leadership and game-changing growth potential. The footwear and apparel titan pulls revenue from blockbuster brands like Jordan and Kobe, while also expanding into large, untapped niches and geographies. Its women's line, for example, just posted its ninth consecutive quarter of double-digit growth and is outpacing the men's business by a wide margin.

The longer-term outlook looks strong as people around the world buy more athletic goods. Nike's China territory surged 27% higher in fiscal Q3, and there are likely many years of solid growth ahead for Nike's international markets.

Besides owning some of the world's most valuable brands, Nike's dominant market position looks secure thanks to two important competitive advantages -- both of which relate to scale. The company spends close to $3 billion per year on advertising, brand events, and digital marketing. Meanwhile, its comparable commitment to research and development keeps the company in front of smaller rivals on the innovation front, which will be critical over the coming decades as sports apparel merges with wearable devices.

Investors have to balance that strong position against an expensive stock, though. Nike is valued at 26 times next year's earnings, compared to Home Depot's 21 and P&G's 20 multiple.