Please ensure Javascript is enabled for purposes of website accessibility
Log In Help Join The Motley Fool
Free Article Join Over 1 Million Premium Members And Get More In-Depth Stock Guidance and Research
By Leo Sun - May 29, 2016 at 7:13PM

The business messaging startup is now worth more than former enterprise kingpin BlackBerry -- but does that valuation make any sense?

Business messaging start-up Slack raised $200 million during its latest round of funding in April, which gives it a valuation of $3.8 billion. This means that Slack is now worth more than BlackBerry (BB 0.83%), which has an enterprise value of $2.6 billion. BlackBerry was once the king of business email and messaging, but it's been losing ground to disruptive messaging apps like Slack.

Slack has about 3 million daily active users, while BlackBerry Messenger (BBM) had 190 million registered users at the beginning of 2015 -- but less than half were monthly active users. But should a seven-year-old start-up really be worth more than a former tech leader which has been around for over three decades? Let's take a closer look at Slack's core business to find out. 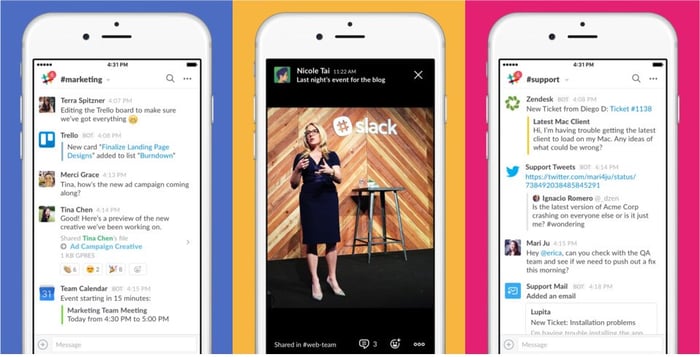 How much money does Slack make?

Slack runs on a freemium model, where users can get more features by subscribing to monthly plans which either cost $6.67 or $12.50 per month. It also offers a more robust enterprise package for $48 per month. Nearly a third of its daily active users now pay for the service. That's a more straightforward strategy than BlackBerry's clumsy attempts to monetize BBM, which included selling stickers to users and offering content channels to paid partners.

Slack expects to generate about $64 million in recurring revenue this year. That would be more than double the $30 million it "expected" to generate in 2015, but the company hasn't released any concrete annual figures yet. However, co-founder and CEO Stewart Butterfield stated last year that Slack wasn't profitable, and that its losses totaled a "couple hundred thousand dollars" per month.

How do we value Slack?

However, Slack might deserve that high valuation due to its steep growth trajectory. If it doubles its revenue in 2016, it would certainly be much more impressive than BlackBerry's expected growth rate of 3%. That could be easy for Slack, since its daily active user base has tripled within the past six months.

If Slack had the same EV/Sales ratio as Yirendai, it would be valued at just $69 million based on its 2015 revenue. If it were valued the same as Palo Alto, it would have a valuation of $330 million. But both figures are well below its current valuation of $3.8 billion.

Slack's valuation seems to defy fundamental gravity, but Microsoft (MSFT -0.03%) was reportedly interested in buying the company for $8 billion earlier this year. However, CEO Satya Nadella and co-founder Bill Gates shot down the idea. Instead of buying Slack at more than 260 times its trailing sales, Gates reportedly wanted Microsoft to improve Skype as a communications platform.

This also highlights a long-term challenge for Slack -- if Microsoft improves its enterprise messaging and collaboration offerings with Skype, Yammer in Office 365, and other cloud-based features, it might prevent Slack from becoming more widely adopted. Facebook's introduction of Facebook at Work, which enables employees to form workgroups and collaborate online, is another major threat. If Slack spends more heavily to widen its moat against big gorillas like Microsoft and Facebook, its losses could widen.

Should Slack be worth more than BlackBerry?

Slack is a hot tech unicorn, but it shouldn't be worth more than BlackBerry. Assuming that Slack generates $64 million in recurring revenue this year, that would only be equivalent to about 2% of BlackBerry's projected sales for the year.

Slack would need to post several more years of triple-digit sales growth to justify its current valuation, but I'm not confident that it can achieve that with bigger enterprise players all eyeing the same market. That's probably why the company is reportedly already getting ready for an IPO -- it wants to go public before it loses its start-up momentum.