Please ensure Javascript is enabled for purposes of website accessibility
Log In Help Join The Motley Fool
Free Article Join Over 1 Million Premium Members And Get More In-Depth Stock Guidance and Research
By Matthew Frankel, CFP® - May 31, 2016 at 1:39PM

Dividends are great, but dividends that have room to grow can make you rich over time. And, while it may not happen right away -- and in one case, we don't want it to -- here are three examples of stocks whose dividends could double. In fact, I'm so confident about these three dividend-paying stocks that I own all three in my personal portfolio.

This bank's dividend could double, but would we want it to?

I've written before that Bank of America (BAC 1.38%) is extremely attractive at its current valuation, and that it's share price doesn't reflect the bank's dramatic improvements since the financial crisis.

As of this writing, Bank of America's dividend stands at just $0.20 per year, which translates to an annual yield of 1.34%. So, it's fair to say Bank of America isn't exactly an "income stock" in the traditional sense of the word.

Although its dividend is low, the bank is rather generous about distributing capital to investors. In fact, the bank returned $4.5 billion to shareholders in 2015 and hopes to increase this amount going forward. The thing is -- the majority of this return of capital was in the form of buybacks, not dividends. This trend has continued into 2016: During the first quarter, the bank spent twice as much on buybacks as dividends.

Bank of America has chosen to emphasize buybacks for one simple reason: It's stock is extremely cheap right now. In fact, the bank trades for just 64% of its book value, and even trades for less than its tangible book value of $16.17 per share. In other words, Bank of America can spend $0.64 to buy a dollar's worth of its own assets. No wonder dividends aren't the priority. 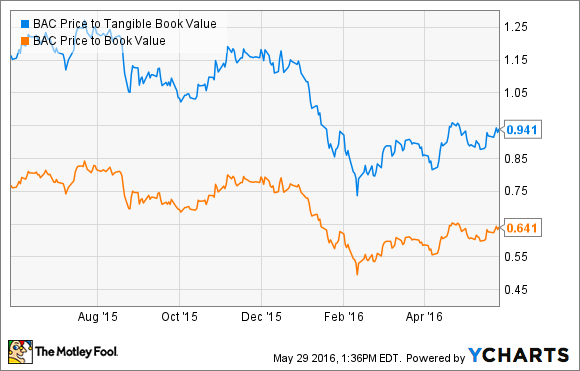 In a nutshell, although I'm confident the bank could get approval to double its dividend if it wanted to, doing so wouldn't be in the best interest of shareholders at this time. I believe Bank of America will someday become a solid income stock again, and as a B of A shareholder myself, I hope the bank continues to take advantage of its depressed valuation. And for the time being, you can, too.

The newest Buffett stock has lots of room for dividend increases

Also, Berkshire loves a cheap stock. Apple has been cheap for some time, but it's especially attractive right now after losing 24% of its value over the past year. As of this writing, Apple trades for just 11.2 times TTM earnings, and it's sitting on a massive stockpile of about $216 billion in cash and securities. When backing this out and only including Apple's business, the company's P/E ratio drops to an unheard-of 6.8-to-1. Granted, the majority of Apple's cash is parked overseas and can't be repatriated without a massive tax bill, but it's still worth considering. 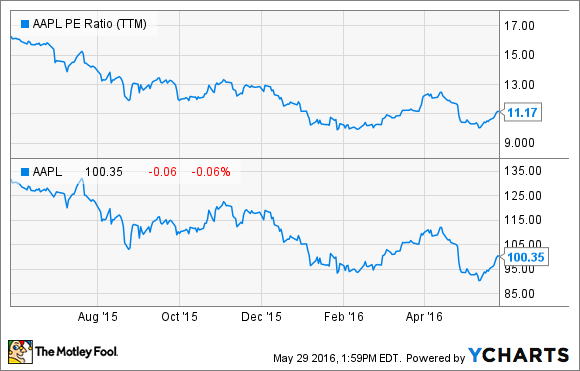 As far as the dividend goes, Apple's current annual payout of $2.28 represents just 25% of its earnings over the past year, so there's plenty of room to grow. While I don't expect it to double from its current level right away, it could happen within the next few years.

This REIT's best days could still be ahead of it

Just to reiterate, I never said these stocks will double their dividends immediately. In dividend investing, long-term trends are much more important than short-term dividend growth. With that in mind, one stock that's definitely worth mentioning is Digital Realty Trust (DLR 1.35%), a real estate investment trust (REIT) focused on data center properties.

Over the past decade, Digital Realty has managed to more than triple its dividend thanks to the exponential growth in data storage needs. Even more impressively, shareholders have been rewarded with an average total return of more than 19% per year. 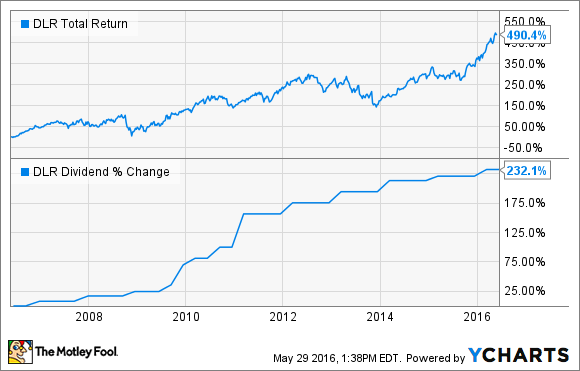 I realize that a stock's past performance doesn't guarantee future success, but in this case, there's no reason to believe Digital Realty's best days are behind it. In fact, a report from Cisco forecasts that global IP traffic will continue to grow at a rate of 23% per year until at least 2019, and mobile and cloud data traffic will grow even faster. So, there should be no shortage of opportunities to grow in the years ahead, and it shouldn't be too difficult to keep occupancy high.

Just because I say these stocks' dividends could double doesn't mean they will, and there are several things (both good and bad) that could prevent this from happening. As I mentioned, Bank of America could decide to focus the majority of its efforts on buybacks and leave its dividend alone for years to come -- which I believe would be the right move. Or, Apple could decide to use a large portion of its cash to make acquisitions, and could rule out large dividend raises for the near future. These would probably both be good things for shareholders unless, of course, you rely on your stocks for income.

On the negative side, Digital Realty could struggle to fill its properties and retain tenants if data needs don't grow as expected. And, since it depends on regulatory approval to return capital to shareholders, Bank of America could be forced to trim its dividends and buybacks in the event of another recession.

The point is, while I think it's likely these dividends will increase substantially, it's important to know there are many different possibilities that could prevent it from happening, so invest accordingly.