LinkedIn (NYSE:LNKD.DL) stock saw a notable jump on Tuesday, rising 4%. There was no particular reason for the move. However, it adds to the stock's ongoing rise since its huge 44% one-day decline in February, when LinkedIn reported worse-than-expected full-year guidance; shares are up about 25% since this big sell-off.

Has the social network's stock simply fallen to a level that's too hard to ignore?

For some context on the current situation of LinkedIn's business, many investors bailed in February when LinkedIn guided for revenue and non-GAAP year-over-year growth in ranges of 20% to 22% and 7% to 13%, respectively. These growth levels are down significantly from LinkedIn's 35% and 41% year-over-year growth in these metrics in 2015, and they are lower than analysts were expecting. Management credited the significant expected deceleration to a range of factors, including weakness in EMEA and APAC geographic segments due to "current global economic conditions," an anticipated deceleration in field sales growth, currency headwinds, tough comparisons for its self-serve products in talent solutions, and a decision to shut down one of its marketing solutions products.

But the company followed up on this worse-than-expected guidance with a surprisingly robust first quarter. LinkedIn's first-quarter revenue and EPS was well ahead of analyst expectations. Even LinkedIn's guidance for Q2 was higher than expected.

As investors digest LinkedIn's more optimistic first-quarter report, the market appears to be viewing the stock more optimistically than it had been.

While a solid first-quarter report may be spurring some interest in the stock, much of the interest may also be simply because of LinkedIn's lower stock price. Even after the stock's recent gains, shares are still far from previous levels. Indeed, shares are still down about 44% from levels six months ago.

The stock's valuation multiples have definitely seen a serious haircut. For instance, last year, LinkedIn's market capitalization, price-to-sales ratio, and price-to-book ratio reached levels as high as $32.5 billion, 11, and 8, respectively. Today, these same metrics are at $18.2 billion, 5.6, and 4, respectively. 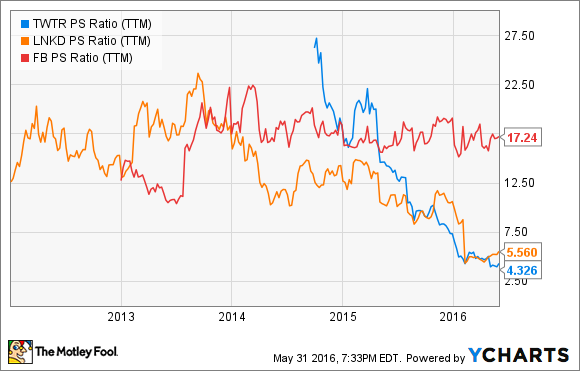 Maybe the market's recent growing optimism toward LinkedIn is merited. Trading as low as it is, LinkedIn stock is at least worth a closer look.