Here's how LinkedIn absolutely crushed my expectations when it reported first-quarter results.

Following LinkedIn's (NYSE: LNKD) disappointing forecast for 2016 earlier this year, investors have been concerned about the online network's growth prospects. But with the company's first quarter now behind it, it appears management's bleak outlook for the year had some meaningful conservatism baked into it. Reporting results after market close on Thursday, here's how LinkedIn scored against my expectations.

Financial performance: outperformed
LinkedIn reported revenue and non-GAAP EPS of $861 million and $0.74, respectively. These figures were up 35% and 30% compared to the year-ago quarter. Both key financial metrics handily outperformed both the company's own guidance and analyst expectations for the quarter.

Ahead of LinkedIn's first-quarter report, I had expressed concern that analyst expectations for the company's second quarter were too high. My reasoning was that the implied growth for the consensus analyst estimate for second-quarter revenue and non-GAAP EPS of 24.5% and 29%, respectively, was far ahead of the growth implied in LinkedIn's full-year guidance; for the full year, LinkedIn had previously forecasted revenue and non-GAAP EPS would increase in ranges of about 20% to 22%, and 7% to 13%, respectively. But I was wrong: LinkedIn's Q2 guidance easily surpassed expectations.

User engagement: outperformed
Another area of concern I had ahead of LinkedIn's report was the company's user engagement metrics. In particular, I was watching unique visiting members and member page views. 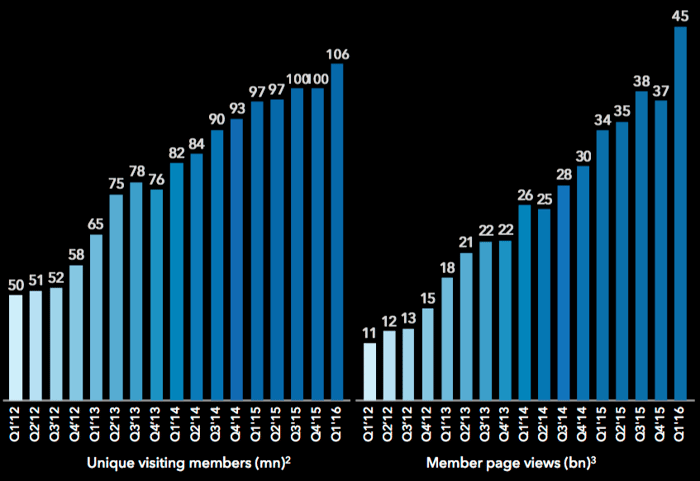 LinkedIn's member page views metric faired even worse than unique visiting members in Q4. Unique visiting members actually declined from 38 billion to 37 billion. I was hoping, therefore, for this declining metric to reverse direction in Q1. But the metric didn't just reverse direction -- it soared. Member page views increased by 13 billion -- LinkedIn's biggest sequential jump in the metric ever.

Overall, LinkedIn handily outperformed my expectations. This is important because it suggests management's worse-than-expected guidance that sent shares plummeting 44% in the trading day following its fourth-quarter earnings report appropriately baked in meaningful conservatism.

Based on the market response to the results on Friday, it seems like I wasn't the only one who had his expectations for LinkedIn set too low. Shares are trading about 2.5% higher at the time of this writing.