Please ensure Javascript is enabled for purposes of website accessibility
Log In Help Join The Motley Fool
Free Article Join Over 1 Million Premium Members And Get More In-Depth Stock Guidance and Research
By George Budwell - May 31, 2016 at 3:04PM

In the first quarter of 2016, billionaire Kenneth Griffin's hedge fund, Citadel Advisors, dumped 75% of its holdings in the common stock in of the small-cap biotech Exelixis (EXEL -1.26%), according to the latest 13F filings. Given that this top fund initially bought this biotech over a decade ago, this sudden change of heart is certainly noteworthy. Moreover, Europe's third-largest hedge fund, BlueCrest Capital Management, which is headed up by billionaire Michael Platt, sold its entire position in Exelixis in the first quarter.

Although it's never a good idea to blindly follow billionaires like Kenneth Griffin or Michael Platt, there's no doubt that so-called superinvestors do have a disproportionate influence when it comes to shaping market sentiment toward individual stocks or entire sectors -- making it worthwhile to know what they are buying or selling on a quarterly basis. With this in mind, let's consider if everyday investors should also steer clear of Exelixis' stock right now.

Exelixis' high-flying ways might be coming to an end

Exelixis' stock has been soaring heading into, and following the FDA approval, of its second-line kidney cancer drug Cabometyx (cabozantinib) this year: 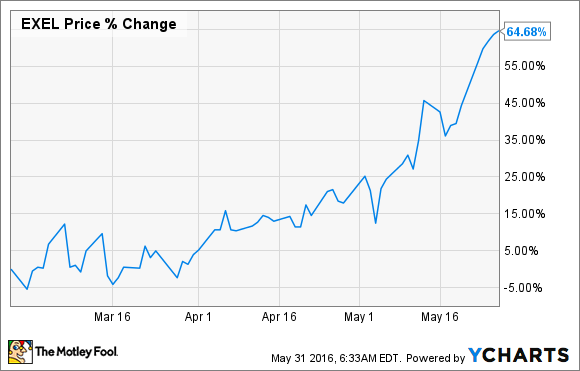 The short story is that Cabometyx essentially walloped Novartis' Afinitor (everolimus) in terms of improving progression-free survival and overall survival in patients with advanced kidney cancer in large, late-stage trial known as METEOR.

With a far superior efficacy profile in hand, Cabometyx would seem to stand a fairly good chance of taking a noteworthy chunk of Novartis' market share moving forward. The problem, however, is that Bristol-Myers Squibb's (BMY -0.46%) checkpoint inhibitor Opdivo also recently garnered a regulatory approval for second-line kidney cancer, even beating Cabometyx to the market by around five months.

As oncologists are becoming increasingly familiar with Bristol's game-changing immunotherapy, and the fact that it's backed by a top pharma company with vastly superior resources, Exelixis may have a tougher time than many expect in its efforts to carve out a profitable niche for Cabometyx. In fact, Cabometyx's saving grace for this indication might be its potential use in a combo therapy with Opdivo. After all, Bristol and Exelixis are currently exploring the utility of a dual therapy approach in a small, early stage study.

Is Exelixis worth the risk?

Exelixis' shares are presently trading at around 7 times the company's projected 2017 revenue, which is a fairly average valuation for a revenue-generating biotech at the moment. So, from a valuation standpoint, Exelixis doesn't seem to be outlandishly risky.

I think the real issue, though, is whether Cabometyx can live up to expectations. At present, the Street thinks that Cabometyx could gobble up somewhere around one-third of the second-line kidney cancer market by the end of next year. While there's no way to tell how accurate these initial sales forecasts will turn out to be, I'm personally not as optimistic since Cabometyx is going up against the 800-pound gorilla that is Bristol's red-hot Opdivo. In short, I think that Bristol's vastly superior resources and the drug's reported rapid uptake for this indication will prove to a huge barriers to Cabometyx's commercialization in the all-important U.S. market.

Of course, I could be wrong, but then again, Exelixis' current valuation doesn't exactly leave much room for error. And without any major catalysts on the near-term horizon, this stock looks, to me, like it will struggle to move much higher.