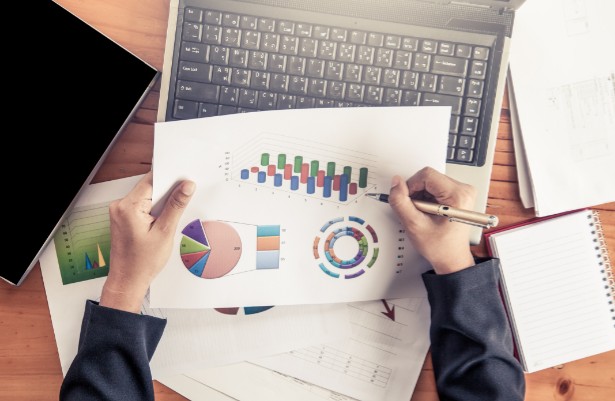 Exchange-traded funds, or ETFs, are a smart and easy way to gain exposure to a variety of sectors with far-less downside risk than individual stocks. If you want exposure to high-growth stocks, but don't trust your stock-picking skills, or don't want to put too many eggs in one basket, you'll find a vast selection of ETFs that you can buy and sell right from your discount-brokerage account. And they typically charge far less than old-fashioned mutual funds.

We've asked three Motley Fool contributors to discuss a favorite high-growth ETF that they feel are best poised to supercharge a portfolio. Here's what they had to say.

Matt Frankel: One of my favorite high-growth ETFs is the Vanguard Growth ETF (NYSEMKT:VUG), which is a passively managed fund that replicates the CRSP U.S. Large Cap Growth Index. Essentially, this fund allows investors to invest in the largest growth stocks in the market without the guesswork of choosing individual stocks.

For starters, I like this option because it's cheap. The fund has a remarkably small 0.08% expense ratio, which is 93% less than the average of similar funds. And there's a modest, but significant, dividend yield of 1.42%, because many of the larger growth companies are dividend payers.

The fund is weighted, which could be a good or a bad thing, depending on how you look at it. In other words, more of your money will be invested in larger companies such as Apple, Alphabet (Google), Facebook, and Amazon.com. In fact, even though the fund owns 336 stocks, the 10 largest holdings make up 26.7% of the assets.

This could be good if you want lots of exposure to companies like these. It could also be a bad thing if you actually want to invest in smaller growth companies such as Wynn Resorts or Fitbit, which combine to make up less than 0.05% of the fund's assets.

A cheap way to buy into a high-growth industry

Brian Feroldi: The biotechnology sector has been on fire for years, far outpacing the growth of the S&P 500, in general. An investor who is looking to turbo charge a portfolio's upside potential should consider buying an ETF that's focused on the space. One of my favorites is the SPDR S&P Biotech ETF (NYSEMKT:XBI).

As its name suggests, this fund's strategy is to invest in a basket of biotech stocks. It currently holds a position in about 90 different companies.

One unique feature of this fund that separates it from other biotech ETFs is that if follows an equal-weight strategy. That means that it invests the same amount of capital into each of the companies that it buys, rebalancing itself each quarter. This strategy prevents the fund from becoming overly concentrated in just a handful of stocks.

A look at its long-term performance shows that XBI has stumbled upon a winning formula. Since it first hit the markets in 2006, the XBI is up more than 240%, which smashes the returns of the S&P 500. 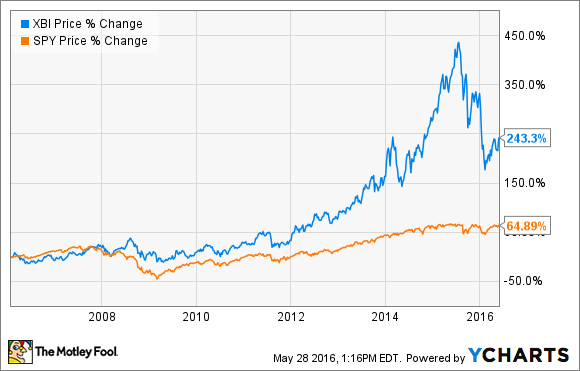 If that amazing growth wasn't enough of a reason to invest, the XBI is pretty cheap to own, too. Its expense ratio is only 0.35%, making it one of the lowest-cost biotech ETFs out there.

As the chart above indicates, this fund -- like the rest of the biotechnology sector -- has had a rough year, falling dramatically from its 2015 highs. That's thanks to investors fleeing from the biotech sector for a variety of reasons, all of which I think are short-term in nature.

With the biotech sector currently out of favor, I think that right now is a great time for investors to consider jumping in. The XBI is my favorite choice as a way to get started.

Cory Renauer: If you're looking for exposure to the most-exciting segment of the biotechnology industry -- immuno-oncology -- the Loncar Cancer Immunotherapy ETF (NASDAQ:CNCR) is for you.

Researchers suggested that tumors employ different means to avoid the immune system decades ago. However, it wasn't until 2011 when the first major drug to exploit one of these pathways, Yervoy from Bristol-Myers Squibb, earned FDA approval.

Since then, the number of exploitable targets that might unleash the body's own defense mechanisms to attack cancer has exploded. From big pharma down to tiny start-ups, the number of programs discovering and developing drugs aimed at those targets is growing even faster.

Keeping track of which companies are best positioned to succeed in this space is enough to keep a team of experts busy. Luckily, this cancer immunotherapy fund is happy to do the legwork in exchange for a reasonable fee.

Like the biotechnology fund that Brian mentioned, the Loncar Cancer Immunotherapy ETF also tracks an equal-weighted index -- but a much smaller one. Every six months, it rebalances the portfolio to include the 30 companies best positioned to succeed in this ever-shifting space.

Seven of the 30 are bigger players with strong immuno-oncology programs, such as Bristol, Merck & Co., and Novartis. The rest of the index is made up of smaller, mostly clinical-stage biotechs, such as soaring Inovio, and recently hammered Celldex Therapeutics. Consequently, these are currently the largest and smallest components of the index. 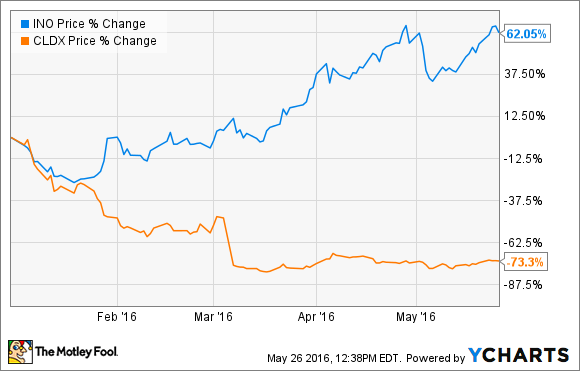 At the end of June, the fund's managers will sell off enough Inovio shares to reduce its proportion from about 6.9% to 3.3% total assets. It will also purchase enough shares of Celldex to bring it up from about 1.2% at present to 3.3% of total assets.

Of course, it could cut either one from the index entirely to make room for better companies. Given Celldex stock's potential, I think the fund will keep it.

In return for reading the scientific literature, attending conferences, then choosing the 30 best-positioned immuno-oncology companies, the fund charges 0.79% of assets under management. This makes it the most-expensive fund of these three; but I think it's worth every penny.