Please ensure Javascript is enabled for purposes of website accessibility
Log In Help Join The Motley Fool
Free Article Join Over 1 Million Premium Members And Get More In-Depth Stock Guidance and Research
By Brian Feroldi - Sep 28, 2015 at 11:54AM

This is what happens when politics and the stock market collide.

While last week was a rough time to be invested in the markets in general, investors with money in the biotech sector had a particularly brutal five day stretch. Shares of the iShares NASDAQ Biotechnology Index (ETF) (IBB 3.19%), an exchange traded fund that holds a basket of 144 biotech stocks with market caps over $200 million, were really hammered during the 5 day stretch, as the fund fell an astounding 11% during the time period. 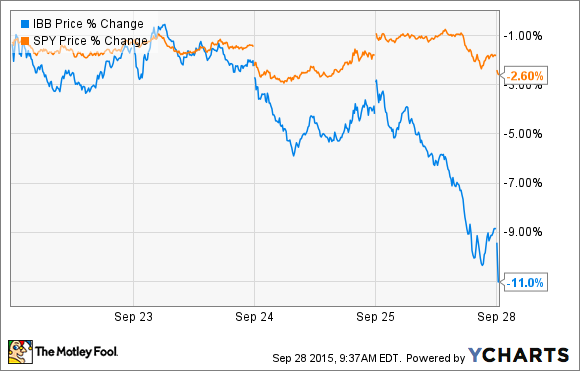 While an 11% drop in the sector as a whole was pretty bad, as usual the pain was unevenly spread. Many biotech stocks that are still in the clinical-stage appeared to fair far worse than average, as companies like bluebird bio, Alnylam Pharmaceuticals, and ImmunoGen all saw their stocks shed a huge amount of value of during the week. 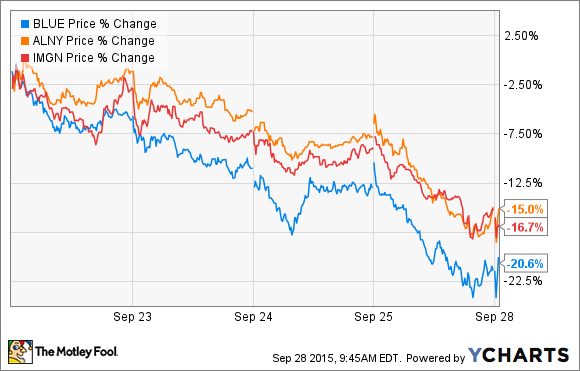 What caused the downfall?
While it's usually tough to find a single culprit that causes an entire sector to sell off, one clear catalyst appears to be presidential-hopeful Hillary Clinton. Early in the week she tweeted out an article by The New York Times to her followers that referenced a huge price jump in a decades-old specialty drug. She called the move "price gouging" by the manufacturer, and she then promised to lay out her plans to address the ever rising cost of drugs. 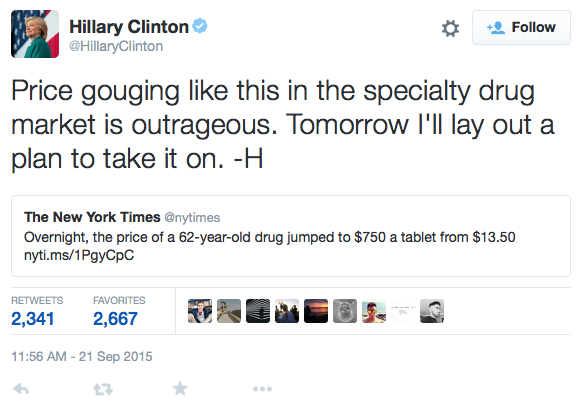 In her plan, released the next day, Hillary stated a number of actions that she would take if elected president to help make healthcare more affordable, which included defending the Affordable Care Act, expanding coverage to more patients and families, lowering deductibles, and reducing the cost of prescription drugs.

Politics and big pharma
Democratic candidates certainly have been upset with the rising cost of drugs recently, as Presidential candidate Bernie Sanders has also put big pharma on notice. The Senator has been active in sending out official letters directly to pharmaceutical companies that have been jacking up the prices they charge, and has been requesting information to justify the price hikes. So far letters have been sent out to Turing Pharmaceuticals and Valeant Pharmaceuticals, as each of those companies has raised prices on certain medications significantly. Sanders noted:

Americans should not have to live in fear that they will die or go bankrupt because they cannot afford to take the life-saving medication they need.

What now?
While this political rhetoric certainly can sound scary to healthcare-focused investors, it will still be quite a long period of time before we know whether proposals from either of these candidates will make make their way into lawbooks. To be clear, these policy proposals would still have to clear a huge number of hurdles before going into effect. Even if these politicians are successful with making their plans into laws, there really isn't a way to tell what kind of effect these moves would have on the stocks of drugmakers either.

Remember when everyone was selling off health insurance companies back in 2010 over fears that the Affordable Care Act, also know as Obamacare, was going to cut their profits to the bone? Investors who sold based solely on those fears missed out on market-smashing returns from health-insurers companies as investors' fears of the law slowly subsided. 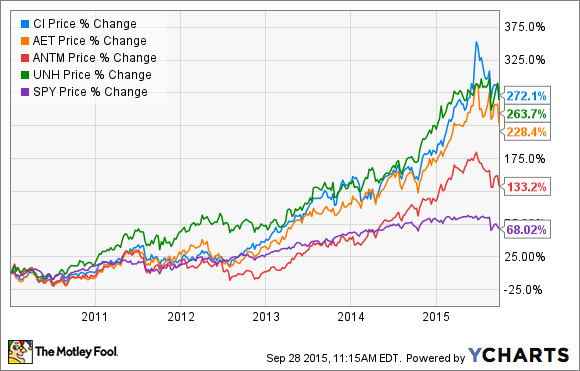 Zoom out
Biotech stocks have always had volatile price swings, sometimes to the upside, sometimes down. That certainly isn't anything new.

However, if you zoom out a bit, you will see that biotech stocks in general have been a favorite of the market for years, and as a group they have crushed the returns of the S&P 500. 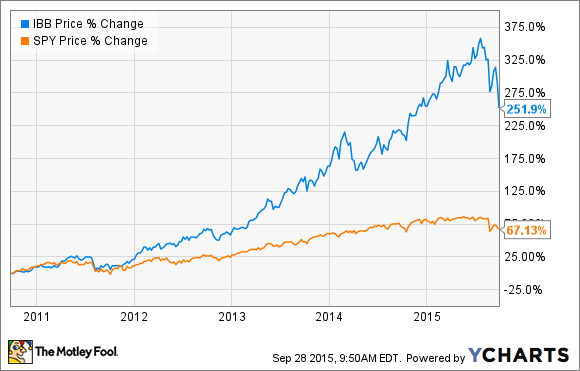 While there are certainly bound to be winners and losers from any healthcare law changes, investors should remember that companies that create new products that help address unmet medical needs will probably fair just fine over the long-term, as there are plenty of diseases that require huge investments in research and development to help find treatments.

It can be tempting to make portfolio moves based on the political rhetoric of the day, but making knee jerk investing decisions is rarely a good idea. In fact, given the recent sell-off, now could prove to be a great time to go bargain hunting in the sector for the strongest name in the group. I for one will be looking to put more money to work in a few biotech names in the very near future.