There’s quite a big difference between these LNG stocks, which makes one the clear better buy between the two.

The global LNG trade is a megatrend that's just getting started. According to energy research analysts at Wood Mackenzie, LNG demand is expected to double from 2015 to 2030, which has the potential to fuel tremendous growth for pure-play LNG producer Cheniere Energy (LNG -0.83%) and its affiliate Cheniere Energy Partners (CQP 0.10%).

If you're going to choose the better way to invest in the global LNG trade, parent company Cheniere Energy is the clear choice between the two. Here's why. 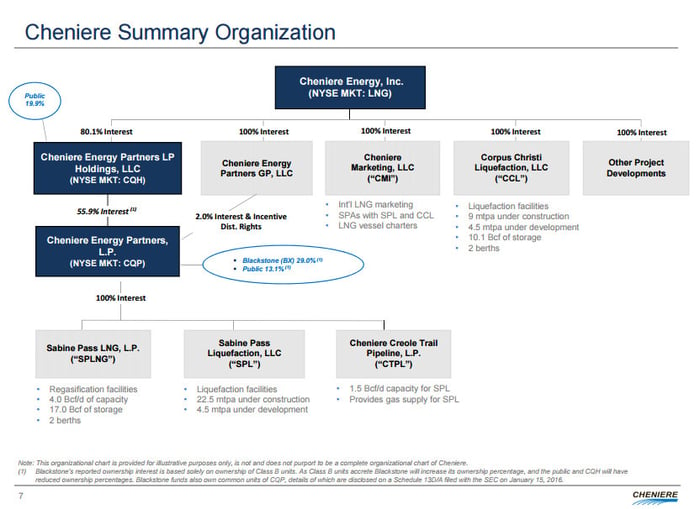 That place at the top is noteworthy because it means that Cheniere Energy is the recipient of fees paid by its various entities, in addition to any income earned from the assets it directly controls.

Let's put this in perspective. As that slide notes, Cheniere Energy Partners derives the bulk of its income from its three operated assets: Sabine Pass LNG, Sabine Pass Liquefaction, and Cheniere Creole Trail Pipeline. However, it doesn't get to keep all the income earned by those assets. Instead, it passes 2% off the top to its general partner Cheniere Energy GP, which is directly controlled by Cheniere Energy.

Corpus Christi Liquefaction is the most-noteworthy asset because it's the company's second LNG export development. Once that facility comes online, it will provide the company with not only growth, but diversification benefits that Cheniere Energy Partners doesn't have, given that it's basically a one-asset company, with Sabine Pass Liquefaction being its major asset.

Cheniere Energy has visible upside due to its 100% ownership interest in Corpus Christi Liquefaction, which is expected to come online in late 2018. That additional upside is not yet available to Cheniere Energy Partners investors. While it's possible that the asset could potentially be dropped down, that's not something investors can bank on because Cheniere Energy could continue to hold it, or create another publicly traded entity to own and operate that asset.

In addition to that visible upside, Cheniere Energy has other wholly owned projects in development that could drive growth in the years to come. These include potential domestic gas-pipeline infrastructure opportunities, as well as international infrastructure investments where Cheniere would be the LNG supplier.

Further, given the projected shortfall in LNG supplies after 2020, there's the potential that Cheniere could develop or acquire additional LNG assets. In other words, all future growth would first be developed at Cheniere Energy, not at its publicly traded affiliate.

Like Dividends and Growth? These 2 Energy Stocks Can Satisfy Both Cravings.
356%