Brian D. Pacampara, CFA
(TMFEZMagic)
Author Bio
Brian has been writing for The Fool since 2006, and currently covers consumer goods stocks. He has a B.A. from Western University (Ontario, Canada) and holds the CFA designation.

Shares of Mercadolibre (NASDAQ:MELI) just don't want to let up. About a month ago, after concluding the stock's valuation was a bit stretched, I suggested investors closely watch the company's looming earnings report for any pullback opportunity. Well, Mercadolibre went on to post market-topping Q1 results, fueling even more share-price momentum in recent weeks. So much for that idea.

To be fair to Mr. Market, it's easy to understand his current enthusiasm for Mercado. In Q1, Mercado's revenue soared 75% in local currencies. Foreign exchange headwinds continue to weigh heavily on U.S. dollar results -- particularly with regards to Venezuela -- but operationally, everything seems to be humming right along. Items sold in Q1 popped 39.4% over the year-ago period, driven largely by strength in Brazil. And excluding Venezuela, gross merchandise volume grew 58.1% on a forex neutral basis.

Of course, one of the most bullish aspects of Mercadolibre has been the breakneck growth of its Mercado Pago payments business, and in Q1, the segment didn't disappoint. 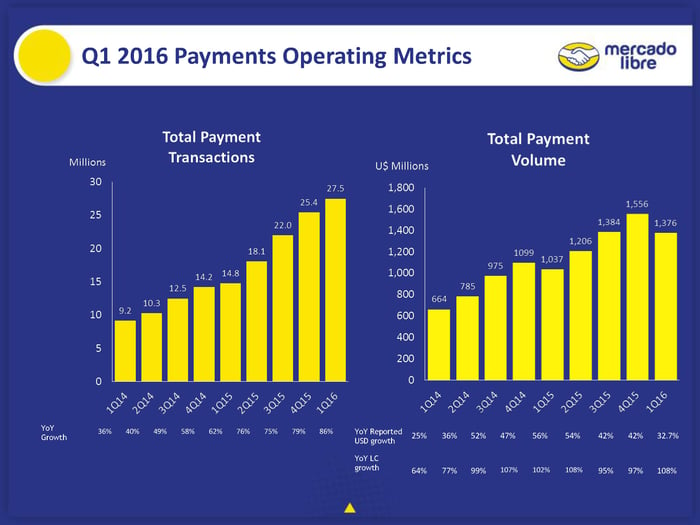 Naturally, PayPal's hyper-growth days are behind it because of its much larger size and already-significant penetration in North America, but the comparison suggests Mercado Pago still has plenty of supersized growth ahead. Year-over-year comps will certainly become difficult at some point, but management doesn't see that happening anytime soon.

Management attributed the strong growth at Mercado Pago to continued penetration of its own payment system and, more importantly, its off-platform merchant service segment. As I touched on last month, off-platform payments have quickly become one of the company's fastest growing opportunities, reinforcing management's belief that the segment could be "multiple times" larger than the marketplace business. In Q1, off-platform payment revenue soared 128% on a forex-neutral basis, representing the segment's fourth consecutive quarter of triple-digit growth. Management cited strong user migration from its regular checkout to its new open-platform checkout as a big driver in Brazil.

Mercadolibre is making plenty of progress on the mobile payments front as well, with merchants quickly adopting point-of-sale systems. In fact, within just 10 months of launch, mobile transactions already represent a double-digit percentage of Mercado's total payment volume in Brazil. To be sure, mobile payments are still in the seed stage, but the early data is yet another indicator of the juicy potential of Mercado Pago.

To chase or not to chase?

There's plenty to love about Mercadolibre's several other non-marketplace growth avenues -- in Q1, financing fees grew 52% (forex neutral), shipping revenue increased 69% (forex neutral), and advertising revenue spiked 136% (local currencies). PayPal has a market cap of about $45 billion, several times larger than Mercadolibre's of just $6 billion. While it's overly optimistic to think Mercado Pago will quickly grow to become just as big as PayPal, the size discrepancy certainly points to long-term multi-bagger potential. The value investor in me wants to keep holding off for a better entry point -- the shares are now up about 40% over just the past three months -- but given Mercado Pago's white-hot growth of late, I may be waiting indefinitely.